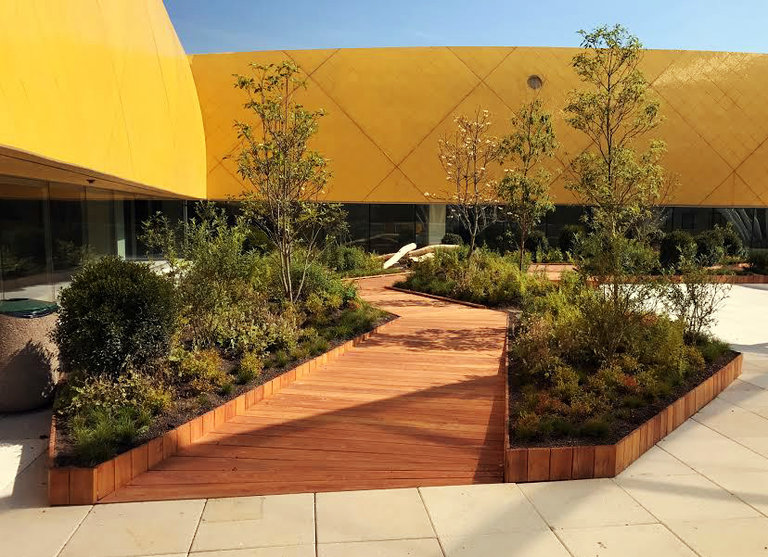 The outdoor space at the Brooklyn Children’s Museum in Crown Heights is to officially open the first weekend in August.

It’s taken nearly a decade, but the rooftop space at the Brooklyn Children’s Museum in Crown Heights is finally ready for the small visitors it is intended to serve. And it arrives with an impressive design pedigree.

That starts with the 118-year-old museum’s current building, designed by Hugh Hardy (who died in March) and then extensively remodeled by Rafael Viñoly in 2008. Mr. Viñoly’s reimagining, which gave the museum its arresting facade of curved yellow walls, included a 20,000-square-foot terrace on the first-floor roof, conceived as a gathering space.

Another high-profile architect, Toshiko Mori, designed a pavilion for the terrace, stretching translucent high-tech fabric over a framework of tubular steel. That structure, looking like a winged creature, has perched there since 2015, visible from the neighboring Brower Park and accessible to those attending special events — but not open to day-to-day visitors. The museum lacked the money to make the terrace a fully functioning space. But with grants totaling $575,000 from elected officials, channeled through the New York State Dormitory Authority, the museum was able to hire Future Green Studio, a rising Brooklyn landscape architecture firm, to make it “a gateway to nature,” Stephanie Hill Wilchfort, the museum’s president and chief executive, said during an inspection on Tuesday.

In one corner, a mini woodland has sprung up with a boardwalk zigzagging through it. Sweetbay magnolia and sassafras trees have materialized. More plants — as well as chairs and tables — are on the way, Ms. Wilchfort said. She said the space would open in August, during a Senegalese drum and dance festival.