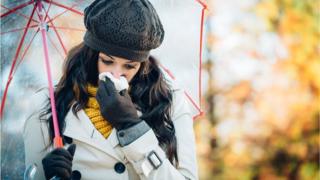 Coughs and colds can be managed without a GP appointment, advises the LGA

Simple self-care measures could end the need for millions of visits to GPs every year, according to the Local Government Association.

It says one in five appointments is for minor ailments such as runny noses and colic in children.

The LGA, which represents English and Welsh councils, asks people to consider getting help from a pharmacist or sites such as NHS Choices.

It says such an approach could help save GPs an hour a day on average.

The LGA took over responsibility for public health – including health awareness – in 2013.

It says people need to “stop and think” before booking a GP appointment.

Back pain is one of the most common causes for a GP visit yet the majority of cases can be treated with over-the-counter treatments and self care.

The same is true of other minor ailments, such as coughs, colds and indigestion, says the LGA.

Jonathan MacShane, who is on the LGA’s Community Wellness Board said: “We know GP practices are under huge pressure as it is.

“So this inappropriate use of those valuable scarce appointments is really worrying.

“And we reckon that an average GP could save an hour a day if people weren’t attending with these kinds of conditions, which they could look after themselves.”

He added: “We could see real benefits if we could get this shift in behaviour.”

Izzi Seccombe, chairwoman of the board, added: “Self-care should be a central part of how we care for patients, which is something councils up and down the country are actively promoting.”

Dr Ian Banks, of the Self Care Forum – a body made up of representatives from organisations including the Men’s Health Forum, Public Health England and the Royal College of Nursing, said: “Most people are entirely capable of looking after themselves most of the time, self-treating when it’s safe and knowing where and when to seek help when they need it.

“There will always be others however, who might need a bit more support to become empowered and confident in making the right health decision.”