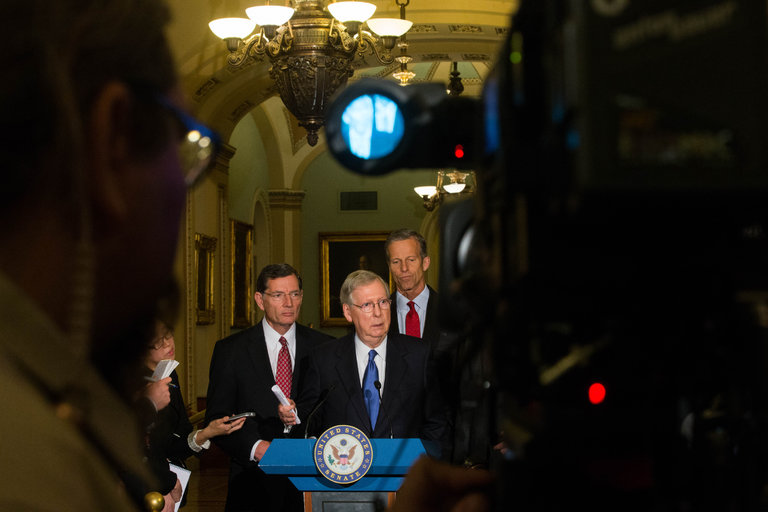 Senator Mitch McConnell, the majority leader, at the Capitol. He cleared the way for the Senate to consider the funding plans next week.

WASHINGTON — The Senate next week will vote on three proposals for financing to combat the mosquito-borne Zika virus, which causes birth defects and which public health officials say will soon pose a major threat in the southern United States.

Democrats and Republicans have been deadlocked over a request by the White House for $1.9 billion in emergency financing to combat the virus, with the Obama administration sharply criticizing Republican Congressional leaders for stalling and the lawmakers demanding that the White House better explain how it would use the money.

Senator Mitch McConnell, Republican of Kentucky, on Thursday initiated procedural steps to take votes on a proposal that would grant the Obama administration’s full $1.9 billion request as well as two other measures that would provide $1.1 billion.

The administration first requested the emergency money in February, but was rebuffed by congressional Republican leaders who urged it to redirect $510 million previously allocated to fight Ebola — a move that was made last month.

Public health officials, however, had warned that the reallocated Ebola money was insufficient — and that some of it was still needed for its original purpose.

The full $1.9 billion proposal, favored by Democrats, is expected to fail, but Republicans seem willing to support a $1.1 billion version that would provide the money without corresponding cuts to other government spending — a compromise negotiated by Senators Roy Blunt, Republican of Missouri, and Patty Murray, Democrat of Washington.

The third version, which would include corresponding cuts to offset the cost of fighting Zika virus, is expected to be opposed fiercely by Democrats. Even if the Senate approves one of the measures, a continuing battle looms in the House, where there is even stronger resistance to government spending by some Republicans.

Ms. Murray issued a statement on Thursday applauding the progress toward approving at least some money, while still urging that Congress approve the full $1.9 billion. “I continue to urge my colleagues to support the president’s full request, but I am very encouraged that Democrats and Republicans will be able to come together with a strong step forward to help ensure families across the country are prepared to respond to this emergency,” Ms. Murray said.

The Senate Democratic leader, Harry Reid of Nevada, however, issued a statement blasting Republicans for their inaction and insisting that $1.1 billion would not be sufficient, calling it a “paltry Band-Aid.”

Mr. Reid warned that any delay could result in children in the United States being born with severe brain defects.

Mr. McConnell’s move came after Senate Democrats cooperated in adopting the first regular appropriations bill of the year, a $37.5 billion measure for energy and water programs. The proposals that Mr. McConnell has scheduled for votes next week are amendments to the second appropriations bill, for transportation and housing programs, which is now the pending business on the Senate floor.

If the Zika financing remains part of that legislation it would not be available for expenditure until the next fiscal year, which begins Oct. 1. Democrats and the White House say the money is needed sooner.