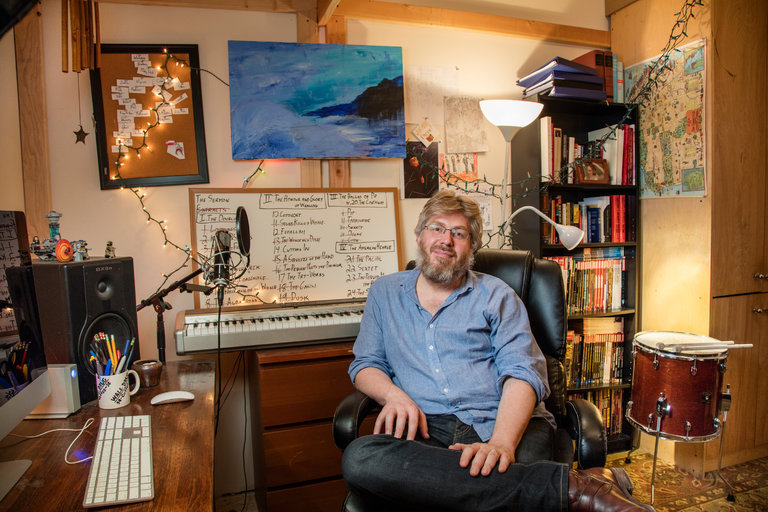 Dave Malloy, the composer and performer, in his Brooklyn studio. He painted the blue acrylic that hangs above the whiteboard: “I keep this thing here as a reminder that you can make bad art and that’s just part of the process.”

The composer and performer Dave Malloy isn’t the kind of New Yorker who can look at a room and instantly tell you its square footage. How big is his rehearsal studio, on a block of old industrial buildings in Gowanus, Brooklyn? “I’m six foot tall,” Mr. Malloy, 41, said this week, eyeing the dimensions. “So if I lay down twice — it’s probably 13 by 11 or something like that?”

With an upright piano against one wall and a wooden thumb piano hanging from another, this unassuming space strung with festive mini-lights is where he writes — though the flurry of awards season has put that on pause for the past month. “Natasha, Pierre & the Great Comet of 1812,” his immersive stage adaptation of a section of “War and Peace,” is up for 12 Tony Awards, including best musical. His book, score and orchestrations are all nominated.

“The coolest thing about having a show on Broadway is that fans sometimes just make art for you,” said Mr. Malloy, a friendly bear of a man who this spring made his Broadway acting debut, filling in for Josh Groban in the role of Pierre, which Mr. Malloy originated Off Broadway. Some of that art is displayed in his studio as casually unframed drawings, but much of the studio’s most crowded wall is devoted to the planning of Mr. Malloy’s writing. A corkboard in the corner contains his 50-year master plan of shows he wants to write. Above a hefty Casio keyboard, a large whiteboard outlines his current project, a musical take on “Moby-Dick,” each song neatly crossed off when he completes it. At the center is a single blue acrylic, which he made and talks about in these edited excerpts from the conversation.

What does it do for you to have a whiteboard of a show staring you in the face?

I have a kind of methodical, structure-based mind, so this helps me to see the whole shape of it. It’s always in my field of vision, in my peripheral, mocking me.

Are the other items on this wall also things you want in your vision all the time?

Is it a lakeshore?

Yeah, I think it is. It’s a little abstract, but there is some kind of aquatic, water-and-mountain kind of thing going on. So that’s another thing: I definitely can look into that painting in a meditative way. I actually find a lot of inspiration in visual art. When I get stuck creatively as a composer, moving to a different art form is really good. Rather than go and listen to music, it’s better for me to go to an art museum or to go to a movie or to read a comic book or read a novel.

I’m just not a visual artist. I’m colorblind is part of it. I also exclusively wear blue, because blue is one of the few colors I can really strongly see all shades of.