In 2009, she decided to leave China. “It was because I want to tell the truth to the world,” she wrote in her memoir. In 2010, she was appointed a visiting scholar at Columbia University in New York, and she continues to live nearby. (Her husband, also a physician, died in 2006.) She has written several books on AIDS as well as a collection of poetry. In an interview before World AIDS Day on Thursday, Dr. Gao talked about her life in the United States and what she considers the still-untold truth about the AIDS epidemic in China.

Why did you release the statement about your wishes after death?

In 2005, as my husband was struggling with throat cancer, we thought about water burial. Being buried in the ground was out of the question, because in Henan, the lease on a grave is only good for 20 years. Afterward, you have to pay more to keep it.

I would like my son to carry out the water burial for me. When he was 11, he was jailed for three years for being connected to me. [During the Cultural Revolution, Dr. Gao was denounced as being from a “landlord” family.] After he was rehabilitated, he went on to university and became a professor. Now that I’ve gone abroad, he’s become worried that the Gao clan might charge him with filial impiety if he “threw his mother into the water.” So I wrote this statement. After I die, my son will take my ashes and scatter them in the Yellow River.

In 2009, you came to the United States and said you would tell the world the truth behind the AIDS epidemic in China. What is that truth? 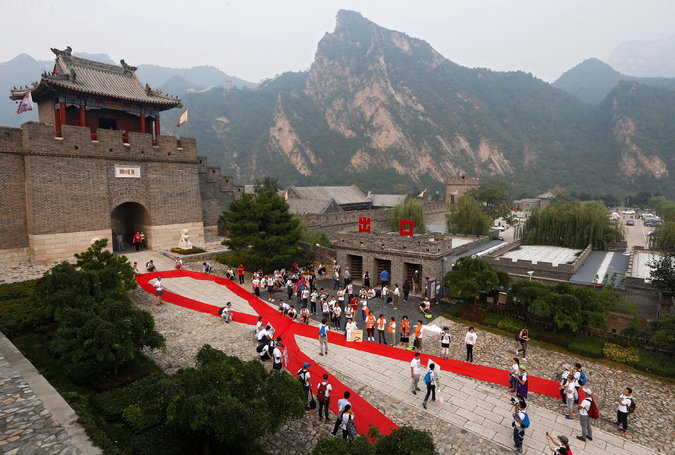 People campaigning for AIDS awareness at a section of the Great Wall, in Tianjin, in September.

The root of AIDS in China was the plasma market, which was introduced not only in Henan but in other provinces as well. Henan was severely affected, however. From the late 1980s to early 1990s, the plasma market took off in several parts of Henan. Then Liu Quanxi became director of the Henan Health Department and strongly pushed the policy, which encouraged farmers to sell their blood. From 1992 to 1998, as a result of the administration of [the provincial party secretary] Li Changchun, blood-selling became an established “industry.” In a few years, blood stations had spread everywhere in Henan. Only about 230 of them were licensed. There were countless illegal ones. The places with the most blood stations then are the places with the most severe AIDS problem now. From 1998 to 2004, under [now Premier] Li Keqiang, who succeeded Li Changchun in Henan, the AIDS incubation period, which is five to eight years, passed, and a great number of people infected with H.I.V. began showing AIDS symptoms and died. AIDS not only killed individuals but destroyed countless families.

This was a man-made catastrophe. Yet the people responsible for it have never been brought to account, nor have they uttered a single word of apology.

I am very angry now. Why? In 2004, the government, which had begun to acknowledge the existence of the AIDS epidemic, sent medical teams to 38 “AIDS villages” in Henan. Yet there were so many other people in Henan who did not get the needed treatment, not to mention those in other provinces. In 2004, the Chinese government began to register AIDS patients and put out this policy: Those with symptoms would get 200 renminbi each month. Those who didn’t yet show symptoms would get 150 renminbi. This came with a condition, however, which was that one must write “sexual transmission” under “cause of infection,” because the authorities had ordered that “blood transmission” not appear in the questionnaire.

They hid the truth from the public. They wouldn’t let the victims say it was blood transmission, only homosexual activity or drug use or prostitution. Since the officials suppressed information about the epidemic while cracking down on anyone who tried to report the facts or go to Beijing to file petitions, the epidemic wasn’t contained in time but kept getting worse.

On Dec. 18, 2003, Vice Premier Wu Yi met with me and we spent three hours discussing the problem. She said, “Someone told me that the main routes of AIDS infection in China are drug use and sex.” I said, “That’s a lie. If you don’t believe me I can call a rickshaw and pull you there myself so you can see what’s happening.” She finally believed me, but soon the toadies were around her again and telling her homosexuality and sex were the main causes.

It must be said that the government indirectly admits the existence of the plasma disaster. I have two pieces of evidence: One is Xi Jinping’s wife, Peng Liyuan. In September 2015, in her speech at the United Nations, Peng mentioned a 5-year-old orphan named Gao Jun. He is now 15 and is from Anhui Province. His parents were infected with H.I.V. from selling blood. He was the first person affected by the epidemic Peng had come into contact with after she became the [Health Ministry’s] ambassador for H.I.V./AIDS prevention [in 2006].

The other evidence is from December 2015, when the AIDS orphans project of Du Cong’s Chi Heng Foundation was awarded the China Charity Award by the Ministry of Civil Affairs. Du Cong, who had came to China’s rural areas in 2002 for a work project, started to help orphans after seeing the situation in the AIDS villages. So far, the foundation has raised about 200 million renminbi [$29 million] and helped more than 20,000 people, including more than 600 orphans.

On the other hand, the Central Committee’s Leading Group for Inspection Work sent a team to Henan in 2014 for a two-month investigation. The first day that they stayed at the Yellow River Hotel in Zhengzhou, more than 300 plasma market victims gathered in front of the hotel to submit their complaints. But they were warded off by officials and the police.

Is the blood disaster under control now?

In 1995, Henan Province began closing some blood-collecting stations. However, illegal blood stations are still active. Last year, I read four news reports about illegal blood stations, three in Beijing, one in Nanjing. Of course, there must be some illegal blood stations that have not been detected. And I think the spread of H.I.V. is not totally under control. Last year, I read a report about a woman who was infected with H.I.V. through a blood transfusion during surgery in Tongxu County, in Henan, which indicates there are still problems with blood donors. Unfortunately, the victims are farmers, and most of them are illiterate. They don’t know what happened to them. They don’t know how to speak up for themselves. They think this happened because of an unavoidable fate. In recent years, they have begun petitioning for their rights, but their situation is still very bad.

How is your life in America?

Because I can’t speak English, I don’t go out that often. Every month I pay $2,000 for my apartment. The money comes from funds Professor Andrew Nathan [of Columbia University] raised for me. Since I didn’t work in the United States in my younger days or pay taxes, I feel rather uncomfortable asking the government for assistance. But in fact I am being taken care of by the United States. Every month I get $87 worth of food stamps. All my renumerations and award money goes to buying copies of my books and donating them.

For some time, I’ve had high blood pressure and blood clots in my left leg. In the past three years, I’ve hardly been able to walk. A caretaker is with me 24 hours a day. My life in the United States is busy. I receive at least six letters a day. And I have many visitors.