Home Business Sketch Guy: Let 2017 Be the Year of Working Hard and Resting... 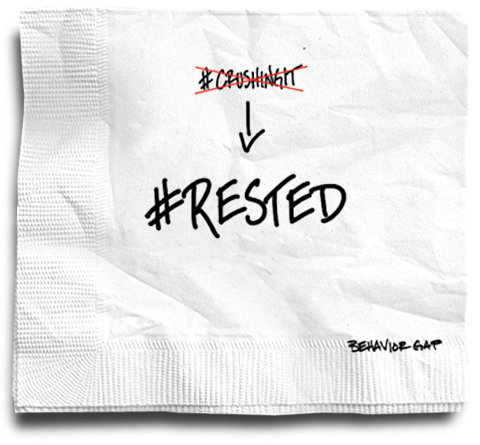 I’m tired — really tired — and I’m tired of being tired. In fact, it feels like I’ve been tired ever since I read Andrew Grove’s book “Only the Paranoid Survive” a decade and a half ago.

That book was the beginning of a sea change in my thinking about work, business, hustling and survival itself — so much so that I’ve been working like a fanatic ever since.

Up at 5 in the morning? Tried it! Daily workouts? Yep. Paleo, bulletproof, gluten-free, cold showers? Check. Build a business, start a side hustle, dominate Twitter, Instagram and Facebook? Yeah, all that too! Make my family a priority? Of course. Serve in my community? Definitely.

I know I’m not alone. The last 10 years have felt like the #CrushIt decade. Every time you turn around, somebody is crushing something. Gary Vaynerchuk wrote the book on it, and according to him, people “need to work harder. And faster. There’s really nothing else to it. I’m exhausted every day, but I’m making all sorts of things happen in my 18 hours.”

He added, “And I’m prioritizing what’s important and what’s not.”

So, there we have it. We can add “exhausted” to words like “cynical” and “busy” that we wear as badges of honor. As crazy it all sounds, I have to admit to having believed it. A part of me in some dark corner of my mind whispers: “This is all true, Carl. If you don’t keep hustling, you’ll end up falling behind, and no one will listen to you. Ever. Again. Then, you’ll just be another failure, left to crawl under a rock, cold and alone to die!”

But since I’ve appointed myself King of Permission Granting, I hereby grant everyone the permission to declare the #CrushIt decade finished. January 2017 will be the official start of the “Work Hard, Rest Hard” decade. We are going to hustle, sure. But we’re also going to rest. In fact, we’re going to be as good at resting as we are at crushing things.

Were going to make being rested cool. We’re going to write about, share and celebrate people like Jason Fried, who switched his company to a four-day workweek during the summer. Then, when people ask how you’re doing, you can say, “Sit down. Let’s talk about it for a minute, because I have time for you, my friend.” At minimum, you should be able to answer, “Rested, and how are you?”

I know this sounds like crazy talk, but we can do it. Make it a priority to be human again — to work hard and to rest hard without buying into the idea that we’ll fail at life if we rest.

And please send me your stories of how you plan to make the switch to hello@beingcarl.com.