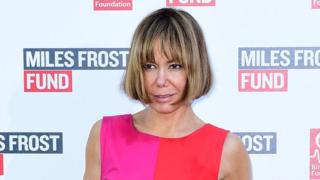 Tara Palmer-Tomkinson rose to fame in the 1990s

The former Sunday Times columnist and reality TV star, 45, had received treatment in 2016 for a non-malignant brain tumour.

Officers were called to her flat in Bramham Gardens, South Kensington, at 13:40 GMT. A woman in her 40s was found dead at the scene, the Met Police said.

The death is being treated as unexplained. Her next of kin and the coroner have been informed.