Yet even when it came to a topic as personal as romantic love, he tended to write from the point of view of the subject itself or from a character not necessarily his own. Over the last decade, he has further concentrated on voicing other people’s lives by penning songs for three musical theater pieces directed by Chen Shi-Zheng, along with adapting Neil Gaiman’s novel “Coraline” as an Off Broadway musical.

When being interviewed, Mr. Merritt also plays a kind of character. He speaks at a glacial pace, digesting a question at length before delivering his answer with the baritone authority of a seasoned monologist.

It seems that one central reason the studiously aloof Mr. Merritt decided to tackle the intimacy of a sonic memoir was “to do an about-face” from his usual approach, he said. The idea didn’t originate with him, but with Robert Hurwitz, who heads up his own record company, Nonesuch. Two years ago, Mr. Hurwitz suggested Mr. Merritt write something with “the conceit of truth,” as Mr. Merritt puts it. Mr. Merritt had just done something along those lines by composing songs for a popular 2014 episode of “This American Life” on NPR, which told the true story of a man’s manipulation by a fundamentalist church, with catastrophic results.

Mr. Merritt said he particularly liked “the level of difficulty” proposed by the memoir project, as well as the fact that its 50-song structure would give it “a built-in set of constraints.” 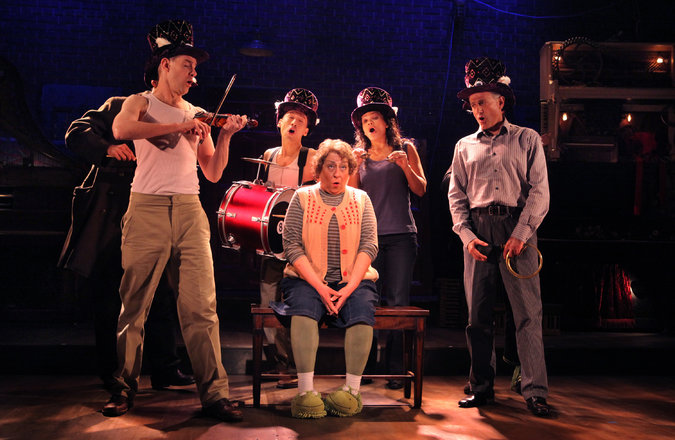 A scene from the 2009 musical “Coraline,” for which Mr. Merritt wrote music and lyrics.

To write pieces from the point of view of his 1-, 2- or 3-year-old self posed a particular challenge. For those, Mr. Merritt relied on abstractions, or on his mother’s memory. For a song written about his fifth year, he wittily channeled the literalism of a child’s perception. As the song recounts, Mr. Merritt’s mother took him to a Jefferson Airplane concert in 1970, at which the singer Grace Slick condemned the horrors of the Vietnam War by saying “they’re killing children over there.” Mr. Merritt thought the murders were happening in another part of the concert space.

The early part of “Memoir” focuses on his relationship with his mother. (Mr. Merritt was in his 40s when he first met his birth father, the musician Scott Fagan; they have not sustained a relationship.) The initial drama conveys the effects of his mother’s seeming attraction to any new age notion that came her way, as well as to an alarming variety of spiritual con men. The result gave Mr. Merritt a rare and unsettled rearing. By the time he was 20, he had moved 33 times.

“I’m sure my mother wishes I had spent more time writing about other aspects of my life,” Mr. Merritt said. Yet, he added, the only dispute she had with the accuracy of his lyrics concerned the use of a colon in one couplet.

Growing up, Mr. Merritt stood so far apart from other children, and created such an elaborate interior life, it’s small wonder that at one point in “Memoir,” he allows that he may have Asperger’s. “If I were suddenly diagnosed by 100 doctors, I don’t think anyone would defend me against the charge,” he said.

Mr. Merritt, who is gay, records no moment of revelation in “Memoir.” “Once you’ve read three gay coming-out stories, you never need another one,” he said.

Barely mentioned, as well, is his career. “It’s inherent in this kind of project that there’s no way of proportioning things by their relative importance,” he said. Instead, Mr. Merritt concentrated on “50 things that were different from each other,” he said. “Most of life is the same. I went for maximum contrast.”

He found a healthy dose of it after he moved to New York City in his 20s. There, he discovered the club Danceteria and gay bars, each of which get their own song. The lure of New York night life, said Mr. Merritt, was its ability to “combine routine with adventure.”

Sex arrived in his life right around the time AIDS started to decimate the city. Mr. Merritt presents that connection as a dark joke on him. “I’m imagining getting hate mail about that,” he said.

The tone of the lyrics conforms to Mr. Merritt’s sardonic character, as does his use of unexpected rhymes. For “Memoir,” he pairs “orphans” with “endorphins,” and “animal heads” with “quadrupeds.” The music on the set proves equally surprising, persnickety and animated. Instruments function like fun-house mirrors, exaggerating and twisting every sound. The result gives “Memoir” both the surreality and the tinniness of children’s music. Mr. Merritt credits his attraction to the high-end sounds favored by children to having “particularly small ear canals. I have no ability to perceive the pitch of low instruments. I only have bass on my records because other people seem to like it. I also don’t care that much about precise tuning. In fact, I like things to be out of tune, because it makes the instruments relate to each other more interestingly.”

Mr. Merritt featured at least 50 instruments on the album, from abacus to xylophone, with stops in between at kazoo and celesta. He admits the math can get fuzzy on the number of devices employed, offering as example his use of wire hangers as drum mallets. “If you are holding a stack of wires in each hand, is that two instruments?” he asked. “It gets complicated.”

Mr. Merritt will bring every one of the album’s instruments on the road with him in March, along with a seven-piece backup band. They’ll perform the whole album, cut into two 90-minute parts, creating two-night stands in each of 12 American cities. “One promoter wondered why we couldn’t do it all in one night,” Mr. Merritt said. “I told him the only way we could would be to play it at twice the tempo.”

As long as Mr. Merritt has had to live with the material he’ll perform, he remains ambivalent about its essential mission — to report his life with honesty. “I don’t see telling the truth in songs as more moral than not telling the truth,” he said. “If anything, I see it as lazier. You can’t paint the Sistine Chapel while sticking with the truth.”