Perhaps no subject better captures the spirit of Mr. Pettibon’s drawings than that of surfers dwarfed by towering waves. “Someday you may find yourself at sea, alone,” reads one of several lines of text handwritten across the churning seas in a big watercolor, ink and acrylic work of 2015. Visitors will themselves confront a graphic tsunami in the survey of Mr. Pettibon’s work that opens in February at the New Museum. Organized by the curators Massimiliano Gioni and Gary Carrion-Murayari, it will present roughly 700 drawings across three floors, as well as dozens of zines and hours of video. Mr. Gioni said it would make visitors “feel like you’ve been shouted at or spoken to in a multitude of voices for an hour or two.” 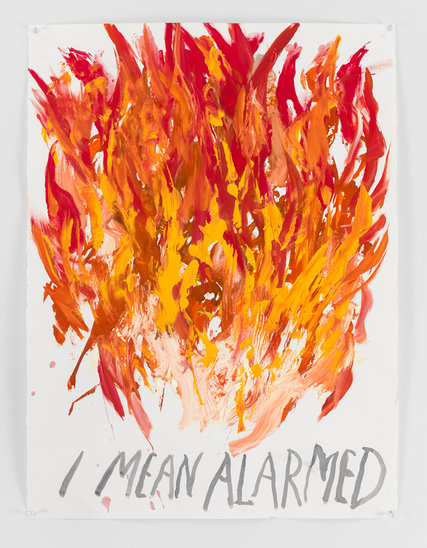 Absorption in a state of distraction, the default mode in the digital era, is both method and message. It serves Mr. Pettibon well, deflecting attention from evidence, in his work and in person, of what seems an essentially inward, melancholy character.

Nonetheless there is a stated focus for the Pettibon survey, which is called “A Pen of All Work” (the title comes from Byron; the pen in question is Satan’s). It is meant to highlight the artist’s literary side. “We want to present him as someone who has an analytical understanding, complex, accurate and deliberate, of his sources,” Mr. Gioni explains. He believes that, taken together, the artist’s writings can be seen as a collaged Great American Novel. To that end, the show includes underlined passages Mr. Pettibon clips from volumes by St. Augustine and Robert Burton, John Ruskin, James Joyce and John Dos Passos. There are quotes from the Bible, and sports writing, and Mickey Spillane.

Barry Blinderman, who gave Mr. Pettibon his first solo exhibition, at the Semaphore Gallery in New York in 1986, said that from the start Mr. Pettibon used words in his drawings to hijack our minds’ drive to find meaning in images, in something like the way lyrics hijack music. But as the New Museum curators see it, the link to music supports a stubborn misperception. Mr. Pettibon’s initial drawings were for fliers and album covers promoting musicians in the Los Angeles punk scene, including his brother, Greg Ginn, a frontman for the band Black Flag (Raymond dropped the family name). As a result, Mr. Gioni contends, “there’s an assumption that Pettibon and his artwork represent an eternal American adolescence.”

Like many artists, Mr. Pettibon objects to interpretations based on his personal life. “It’s a hopeless cause to look at an artist and go into their biography,” he said with some annoyance. “It’s not like I have something to get off my chest and I want to get it down on paper.” He has long dismissed questions about his punk period with particular exasperation. Born in Tucson in 1957 and raised in Hermosa Beach, Calif., he studied economics at the University of California, Los Angeles, graduating in 1977. His father taught English at junior colleges, wrote spy novels (mostly unpublished) and was an occasional painter; his mother was a housewife. Conforming to no stereotype — they were health-food enthusiasts and hippie-bashers — they were each, in their way, sympathetic to visual art.

Perched high on Mr. Pettibon’s studio wall, along with various small, kitschy canvases, were a handful of his father’s paintings of nudes. And among Mr. Pettibon’s own works in progress was a drawing based on the painting commonly known as “Whistler’s Mother.” When asked about the anomalous image — there are few mothers in Mr. Pettibon’s work — he reflected that his own was “my only fan for so many years.” He added: “She’s 95 now. She’s a great person. We always got along. The situation with the rest of the family is more complicated.”

The subject quickly changed. But one undeniably self-referential character of his work is its gender. Guys — the things they like and the ways they behave — are its predominant subjects. The work’s simmering anger, dark humor and formal aggression, along with many of its references, are shared with such peers as Mike Kelley and, more distantly, Paul McCarthy, both visual bards of male angst. Studio visitors have been invited to hit a few baseballs (Mr. Pettibon had a pitching machine in a previous workplace) or to shoot some hoops (his current studio again has a basketball hoop; there is also an old surfboard on the wall). Even guessing the source of unattributed citations can become, for colleagues and critics, a competitive sport.