“That would be a big advance in autism,” he said.

In the study, scientists tracked the eye movements of 338 toddlers while they watched videos of motherly women as well as of children playing in a day care center. The toddlers, 18 months to 24 months old, included 250 children who were developing normally (41 pairs of identical twins, 42 pairs of nonidentical twins and 84 children unrelated to each other). There were also 88 children with autism. 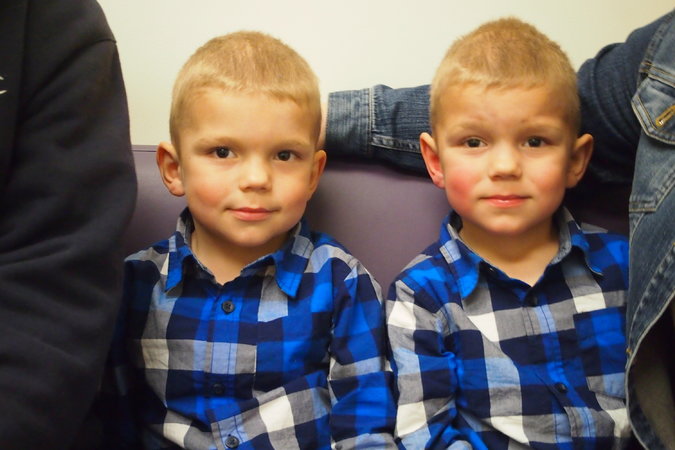 A study tracked the eye movements of 338 toddlers, including 42 pairs of identical twins.

In the study, how much one identical twin looked at the eyes of people on screen matched the other identical twin 91 percent of the time. For fraternal twins, the match dropped to 35 percent. For unrelated children, when measured as pairs of the same age and sex, the match was 16 percent. And when the unrelated children were paired at random, their time spent looking at eyes did not match at all, said Warren Jones, the study’s senior author and an assistant professor of pediatrics at Emory University School of Medicine.

How much the children looked at mouths followed a similar pattern. And although each toddler watched the videos without other children present, identical twins often moved their eyes at nearly the same moment — as close as 16.7 milliseconds apart — and in the same direction.

“It’s a really remarkable set of findings in that it really shows that genetic factors are driving differences in the way that toddlers are looking at faces,” said Brad Duchaine, a professor of psychological and brain sciences at Dartmouth, who was not involved in the study. “This suggests that genetic differences drive this important aspect of the way that we interact with others.”

Dr. Jones, whose co-authors include Dr. John Constantino, director of child and adolescent psychiatry at Washington University in St. Louis, and Ami Klin, director of the Marcus Autism Center at Children’s Healthcare of Atlanta, said: “When we started to get the results back, I thought that I had the wrong data because the match between identical twins was so strong. I thought I might have mistakenly matched data from the same twin.”

With the children with autism, the researchers found that, compared with typically developing toddlers, they spent significantly less time looking at faces and more time looking at objects. That difference was especially pronounced with the day care videos, scenes presenting many more things to look at than the close-up videos of women talking to the camera, Dr. Jones said. When watching the day care videos, toddlers with autism looked at faces half as often as typical children did, and at objects almost twice as much.

The difference was so consistent that researchers could identify most children with autism just by looking at the eye-tracking results, Dr. Jones said. That result reinforced previous research in which Dr. Jones, Dr. Klin and colleagues showed that babies from 2 months to 6 months old who looked less at people’s eyes in videos were more likely to be given an autisim diagnosis at age 3 and that eye-tracking could provide an early behavioral indicator of autism.

Experts said that because the study shows that a social behavior that is significantly different in children with autism is strongly influenced by genetics, it might help scientists home in on specific genes to better understand autism or at least a key autism characteristic.

That suggests, he said, that the genetically driven behavior involves “seeking out” social information found in the eyes rather than “merely responding to” facial features, a finding that could help pinpoint “what is disrupted in children with autism as they develop and learn about the world.”

Dr. Nelson said one question for further research was “how specific are these phenomena to autism, or might you see them in other neurological disorders?”

Another question is “how does this actually affect longer-term development of the brain,” said Matthew Peterson, a postdoctoral researcher at the Massachusetts Institute of Technology, whose studies have found that “everybody has a preferred location or position on the face where they will always look when they identify someone” — higher or lower on the face; toward the eyes, nose or mouth.

In the new study, researchers also tested the typically developing children again at age 3 and found that identical twins still strongly matched in how much they looked at eyes and mouths. That suggests that compared with genes, “that experience they’re having in that year — that’s not having much of an influence,” said Dr. Duchaine, whose work has found genetic roots to face recognition.

Most likely, through evolution, we came to have “genes that regulate the formation of the neural circuits that underpin how we visually inspect the social world,” he said.

“That,” he said, “helps ensure that we are social beings.”