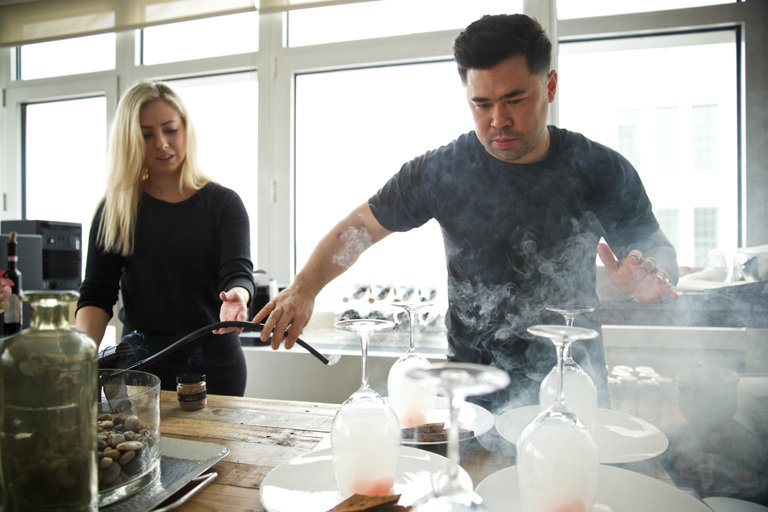 The music producer Malay infused salmon with smoke while making breakfast for his wife, Iris Belson, and guests on a recent Sunday.

The music producer Malay won a Grammy Award in 2013 for his work on Frank Ocean’s album “Channel Orange.” Since then, he has kept busy with multiple projects, including producing albums for Sam Smith and Zayn Malik. This means he is in the studio seven days a week and rarely gets a “full day off,” he said. Still, Malay (pronounced muh-LAY), 38, whose real name is James Ryan Ho, fits in some downtime on Sundays to connect with his wife, Iris Belson, 30, a singer, and to indulge in some cooking. They live in Williamsburg, Brooklyn, with their dogs, Boo-T, 5, a Shih Tzu, and Coco, 3, a Maltese Yorkie.

NOCTURNAL The earliest I wake up is 10, though sometimes it’s 11. I am a nocturnal person and like to work late, but even if I’m not working, it takes me a few hours to wind down from the day, and I usually go to bed between 4 and 5. Fortunately, Iris has the same schedule.

GRAB THE LEASHES Boo-T and Coco are antsy to get out when we’re up, so before anything else, we throw on gym clothes and take them for a walk along the Brooklyn waterfront, which is right by our apartment.

COLD BREW One the way home, we stop at a sandwich shop on Wythe Avenue called Dépanneur to get our coffee fix. They sell this great Brooklyn brand called Toby’s Estate, and even if it’s freezing outside, Iris and I both order the cold brew.

SWEAT IT OUT With our coffee buzz on, we head to the gym in our apartment building for a quick workout. Our Saturday nights are typically wine-infused, and I like to do an intense cardio to ward off the effects. Normally, it’s a sprint on the treadmill or 30 minutes of jump rope.

HOME-COOKED BRUNCH I am really into cooking. My family is from Malaysia originally, and in our culture, kids learn basic kitchen skills like chopping as well as cooking at a young age at home by helping their families. Back then, it was a chore, but now I love experimenting with new recipes, especially for Sunday brunches. I just got a Smoking Gun to smoke foods, and I’m using it on egg dishes. The last thing I made was a lobster eggs Benedict that was smoked. I made the hollandaise sauce from scratch. We both try to eat healthy and follow a paleo diet with low carbs but love good food.

MAKING MUSIC Normally after brunch, I Juno it to Manhattan to Germano Studios in the Village where I tend to my various projects. Besides Sam Smith and Zayn, I’m working with this up-and-coming hip-hop singer from Portland, Aminé, who has a popular song out right now called “Caroline.” And, I am also working on my own album, which is a collaboration of songs with many of the artists I have worked with.

COCKTAIL HOUR My usual workdays average between 10 to 16 hours, but I try to limit myself to five hours on a Sunday. Around 10, Iris and I meet up at Soho House in the meatpacking district or at the newer one on Ludlow Street. We start off by having a drink or two. Without fail, Iris gets the Eastern Standard, this cucumber vodka mint cocktail. For me, it’s either Japanese whiskey or a nice Brunello from Italy.

FEAST After I’ve unwound a bit from my afternoon of work, we order dinner. If we’re at Ludlow House, we like their restaurant Ducked Up where they have the best Peking duck I have ever eaten. It comes with pancakes, and we order sides like baby kale salad, roasted carrots and kimchi fried rice.

KITCHEN PREP When we’re back in Williamsburg, which is usually by midnight, I spend an hour or so in the kitchen cooking food for the week ahead. I do a big batch of roasted chicken breast, maybe some braised beef, steamed broccoli with garlic and lemon, and roasted cauliflower.

CUDDLE UP Iris, the dogs and I get into bed and cuddle up to catch up on all the Netflix series we’re into like “The Get Down,” Baz Luhrmann’s show about musicians in the South Bronx in the 1970s. We also like “Stranger Things” and “House of Cards.” We’ll watch for a few hours until we all eventually fall asleep.