Home Lifestyle Art Taking a Selfie in Berlin, With a 3-Ton Camera

For all its old-fashioned futurism worthy of a Fritz Lang film, the Imago camera is part of a small but steady renaissance of analog photography, especially of the “instant” sort. Since Polaroid stopped making instant film in 2008, a number of companies have sought to fill the void, most notably Fujifilm with its Instax range. For what it is worth, it takes Imago 12 minutes to print one 200-centimeter-by-60-centimeter (79 inches by 24 inches) photographs. 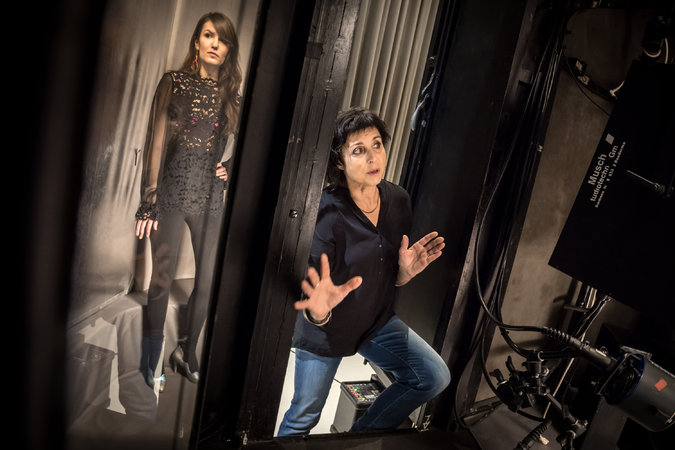 But it is more than this near instant-ness, at least for a print product, that appeals to today’s on-demand generation, said Susanna Kraus, the impresario and artist behind Imago. Because the photos are taken on direct-positive silver gelatin photo paper, rather than as a negative image onto film, “you get something that can’t be reproduced,” she said. “In a time in which everything is endlessly reproducible, that one, unique object is becoming ever more precious.”

Though Imago is a commercial venture, she sees it as an art project as well, a study of every self-portraitist’s battle between enactment and surrender. Her hunch that many people craved the unreproducible led her to open — or more precisely, reopen — for business 10 years ago. Her father, Werner, a physicist, had invented the optical heart of Imago — whose technical properties Ms. Kraus refuses to talk about — in Munich in the late 1960s so he could study rotary engines for a German carmaker.

The lens allowed Werner Kraus to look inside a working engine and take photos of pistons and combustion chambers to gauge fuel efficiency.

When that project ended, he and an artist-friend, Erhard Hössle, built Imago around the powerful optics. But they stopped using it in 1978, as manufacturing of Imago’s photo paper ended, and the camera fell into disuse and disrepair, to be saved only by chance.

Florian Hufnagl, curator and later director of what is today the Design Museum in Munich, took a shine to the camera and sheltered it in the museum’s storeroom for almost 15 years.

“I found Imago fascinating from the first moment I saw it,” Mr. Hufnagl said in a telephone interview. “It took an everyday object, a camera, and distorted it in order to make us see it anew.

Ms. Kraus, 59, eventually reclaimed Imago and was able to restart production of the photo paper in 2006. After touring museums with the camera, she turned it into a Berlin fixture, moving it into an airy gallery in the central Kreuzberg district five years ago. On average, she said, five to 10 customers climb inside the Imago every week. (She added a slightly smaller, collapsible camera, the Imago Photour, in 2014. It went on show in galleries in several European cities, and, in cooperation with the Shis, in Shanghai.)

And Ms. Kraus managed something at least one of her four assistants silently thought impossible: She sold an Imago, for “a very low seven-digit amount,” she said, a figure confirmed by the Shis.

It is not quite mass production, but Ms. Kraus thinks there is a market for four more Imagos. The Shis’ Imago is being custom-built largely by Ms. Kraus’ son, Jakob, and his wife, Gogol, both boatbuilders.

“The Shis first wanted an exterior that looked like a giant prism,” Jakob Kraus said. “But we had to change that design quite a bit to accommodate all the parts that make the Imago work.”

Like the original, the new Imago will be built around the lens, which sits at the tip of the camera’s axis, covered from the outside. It concentrates the light from the compact studio, and reflects a big and bright circle of light back into the exposure chamber and darkroom. Each Imago holds two people: the self-portraitist and the so-called “photographer,” each in a separate chamber. The latter primes the camera. But it is the former who, in more than one sense, has to compose him or herself. And then take a single shot.

She had paid 370 euros, or about $391, to take a full-length self-portrait. The Imago team bustled around her and explained the optics in the studio. Ms. Kraus emphasized Ms. Woody’s responsibility. “I can’t move the camera,” she said. “To make a good portrait, you have to move into focus, you have to get into the right position. Where is the lens? Where is the light?”

Ms. Kraus gave Ms. Woody a final dusting of face powder and closed the door of the studio chamber. One of her assistants, Alexander Grennigloh, took his position as the photographer in the exposure chamber and put six-and-a-half feet of photo paper in place.

The photograph, by unanimous agreement of the Imago team, was a triumph. Ms. Woody looked serene on the silver gelatin paper — and was an experience richer in real life.

“You can’t be too self-conscious,” she said afterward. “I still had my bangs in my face. But then I said, this image is never going to be perfect. It was a very decisive moment. I said, however this comes out, it’s part of me.”