The couple rent the ground floor to a commercial tenant, and live in an apartment carved out from the second floor. The arrangement was inspired by the Brooklyn brownstone gentry they once aspired to be, who live on the upper floors of their restored townhouses while renting the garden level.

“We couldn’t afford to do that there,” Ms. Turner said. “But we wanted to try our hand at doing it here.” 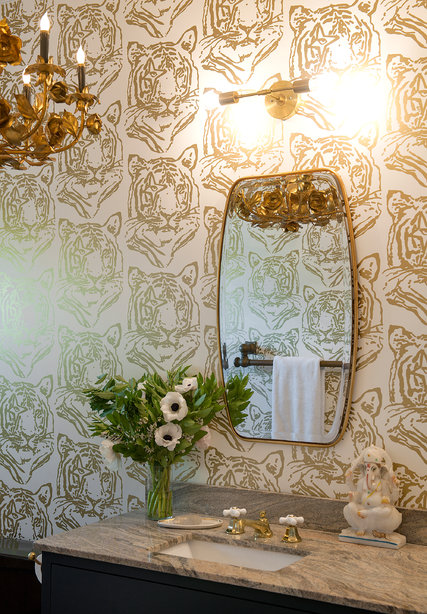 Tiger-motif wallpaper in the master bathroom.

The building, built in 1880, had walled-off rooms stuck in 1980. To transform it into a modern open home, the couple hired Nick Dryden, a local architect who has played his own role in Nashville’s hipification. His firm designed the popular 404 Hotel and the artisanal coffee house Barista Parlor Golden Sound, among other trendy projects. Given the white-hot real estate market, Mr. Dryden said, the building Ms. Turner and Mr. Ezell bought “could easily have fallen prey to the open market and been bulldozed.”

“The structure has been reclaimed and reinvested in,” he said. “Kudos to them for taking that on.”

Undertaking a renovation when the very ground around you is shifting from progress can be challenging. One day, after blasting nearby for yet another high-rise, it was discovered that a portion of the house had sunk an inch and a half. The blasting had compromised the load-bearing historic masonry walls, requiring shoring and reinforcement.

After years in Brooklyn rentals, Ms. Turner’s instinct was to work around it. “I was trying to save money — you know, ‘We can play marbles in there, we’ll deal with the slope,’” she said with a laugh. “Nick was like: ‘Windows don’t come slanted. It doesn’t work that way.’”

But, Ms. Turner added, to have full ownership of a space for the first time in her life was “a wonderful and exciting and creative undertaking.” She oversaw decorating the apartment, with help from her friend McLean Barbieri, a local interior designer, and approached the project as you’d expect an artist to: with each room and hallway done in bright, vivid, often clashing colors and patterns.

For a half-bathroom, she used tiles made of recycled skateboard decks, which were inlaid into a rectangular section of the exposed brick. The same bathroom has a chocolate-brown toilet, a toilet-paper holder covered in camel’s hair that Ms. Turner found “in this dumpy flea market in Tangiers” and a scalloped agate sink fit for a mermaid.

“If I like it, I think it all goes together,” she said. “Which has been a helpful mind-set. I like it — it works!”

Ms. Turner’s favorite decorating medium is lighting: Each room contains a wacky fixture, including a paper-plate chandelier by her friend Christopher Trujillo in the dining area.

The wackiest of them greets visitors in the entry hall. When Ms. Turner inherited a crystal chandelier from her mother-in-law, who was downsizing from her traditional Southern home in tony Belle Meade, Tenn., she spray-painted it yellow and affixed it with 100 plastic bananas.

“There’s this fine line between ugly and fabulous,” Ms. Turner said of her style. “And I’m into ugly, in general.”

With the move to Nashville, Mr. Ezell has switched careers from Manhattan literary agent to running a composting company with his brother. He said he generally agrees that his wife can do her thing with the apartment, although he has the occasional veto. When Ms. Turner found a dated and hideous concrete-and-glass coffee table on Craigslist and stuck it in the family room, he evidently didn’t exercise his rights.

“I’ve grown to appreciate it,” Mr. Ezell said. “Like a mangy puppy.”

Their renewed love for Nashville is something more. Since returning home, the couple has had a second son, Vreeland, and after two years in a temporary house while the renovations were completed, they finally moved into their home in January. Ms. Turner has a solo show this spring at the Frist Center for the Visual Arts.

And what about the buildings going up all around her, and the people moving there every day, transforming Nashville into something new and as yet to be determined?

“I mean, there’s all these glass boxes downtown,” Ms. Turner said with a shrug, accepting the double-edged sword of progress. “As long as we don’t turn into Atlanta.”