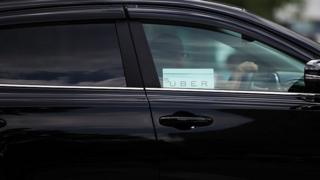 Uber said discrimination had no place on its platform

Ride-hailing companies such as Uber and Lyft may discriminate against black people and women, a study from three US universities suggests.

Women were more likely to be overcharged or taken on elongated routes, it says.

The two-year study was conducted by researchers at the Massachusetts Institute of Technology, Stanford and the University of Washington.

Undergraduates were given identical phones with three ride-sharing apps – from Uber, Lyft and Flywheel – and instructed to take a handful of prescribed routes.

They noted down when:

In the Seattle experiment, the researchers came from a range of different racial backgrounds.

In the Boston test, each researcher requested rides under two different names – one “white sounding” and the other a “distinctively black name”.

In Seattle, trip requests from black riders took up to 28% longer to be accepted by both UberX and Lyft than those from their white counterparts.

In Boston, the cancellation rate for black-sounding names was more than twice as frequent as for those using white-sounding names.

Male passengers with black-sounding names requesting a lift in low-density areas were more than three times as likely to have their trip cancelled.

For women, the results suggest that female travellers are often driven further.

“The additional travel that female riders are exposed to appears to be a combination of profiteering and flirting to a captive audience,” the researchers noted.

The report authors concluded: “Passengers have faced a history of discrimination in transportation systems.

“Peer transportation companies such as Uber and Lyft present the opportunity to rectify long-standing discrimination or worsen it.”

“Removing names from trip bookings may alleviate the immediate problem but could introduce other pathways for unequal treatment of passengers.”

In a statement provided to the BBC, Rachel Holt, head of North American operations at Uber, said: “Ridesharing apps are changing a transportation status quo that has been unequal for generations, making it easier and more affordable for people to get around – no matter who they are or where they live.

“Discrimination has no place in society, and no place on Uber.

“We believe Uber is helping reduce transportation inequities across the board, but studies like this one are helpful in thinking about how we can do even more.”

Lyft spokesman Adrian Durbin said in a statement: “We are extremely proud of the positive impact Lyft has on communities of colour.

“Because of Lyft, people living in underserved areas – which taxis have historically neglected – are now able to access convenient, affordable rides.

“We provide this service while maintaining an inclusive and welcoming community and do not tolerate any form of discrimination.”