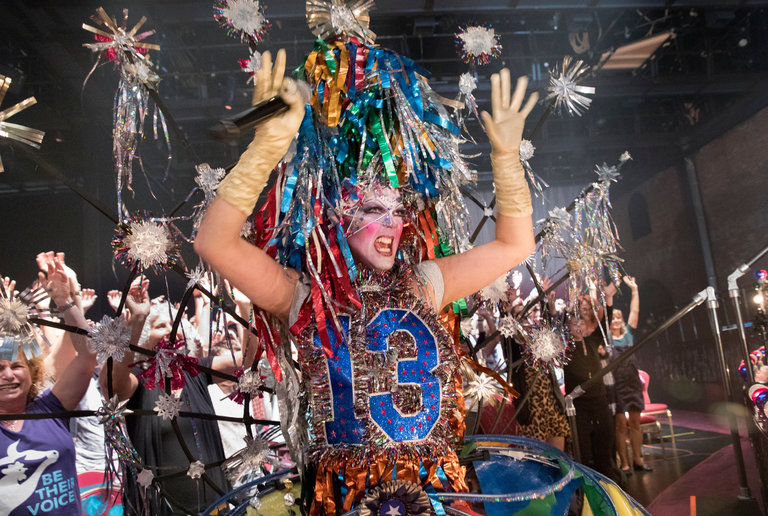 Taylor Mac in “A 24-Decade History of Popular Music” at St. Ann’s Warehouse in Brooklyn.

The genre-busting, glitter-dusting performance artist Taylor Mac and his musical director, Matt Ray, have been named winners of the 2017 Edward M. Kennedy Prize for Drama Inspired by American History, for their 24-hour work, “A 24-Decade History of Popular Music.”

The piece, billed as a “radical fairy realness ritual,” is a decade-by-decade walk through American history from 1776 to 2016, told through the songs of the time, reinterpreted through a radical queer lens.

It was performed in its entirety last fall at St. Ann’s Warehouse in Brooklyn, first in three-hour segments and then in a continuous 24-hour marathon, complete with shared audience meals, group dance breaks and, mercifully, a sleeping loft for weaklings (like this reporter).

The prize jury called it “a vast, immersive, subversive, audacious and outrageous experience,” that uses a variety of techniques to “explode our country’s history” and show, in Mr. Mac’s words, how “in America the oppressor is forgiven but the outsider is vilified.” (Wesley Morris, reviewing the marathon performance in The New York Times, called it simply “one of the great experiences of my life.”)

The prize, which carries an award of $100,000, will be presented at a ceremony at Columbia University in the spring. Created by Jean Kennedy Smith, a former United States ambassador to Ireland, in honor of Senator Kennedy, her brother, it is aimed at galvanizing “a new and vigorous exploration of American history and the institutions of American politics among dramatists and creators of musical theater.” The jury includes playwrights, musical theater writers, scholars of American history and politics and others. Last year’s winner was Lin-Manuel Miranda, the creator of the musical “Hamilton.”