Q. I signed up for WhatsApp out of curiosity last year but never used it. Today I got an email message about someone sending me a WhatsApp voice mail. Is this for real? 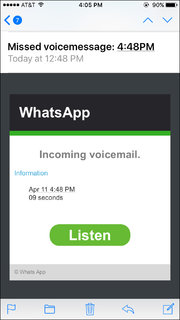 The WhatsApp voice-mail scam has been around for years and still floods inboxes regularly in the hope of tricking an unsuspecting user. Don’t be that user.

A. The random note about WhatsApp voice mail is most likely malware hiding behind a spoofed email message that has been dressed up with copies of the company’s logo and typography. Versions of the voice-mail scam have been floating around the internet since at least 2013 in an attempt to get unsuspecting recipients to download malicious code to their computers and devices.

The WhatsApp site has a guide to dealing with “strange messages” and suspected hacking attempts on its site; one way to tell is to open the message header and look at the sender’s real address. Panda Security is among the anti-malware sites with articles that describe various WhatApp scams to avoid.

As a communications service that claims one billion users in 180 countries, WhatsApp is a big target and joins large banks, social networking sites, credit card companies, the Internal Revenue Service and other institutions as potentially lucrative targets for hackers all over the world. Email, text message and phone scams constantly evolve, so taking a default position of distrust on any out-of-the-blue contact until you can verify it can help keep you safer.

It is also a good idea to be aware of the kinds of scams out there. The Federal Trade Commission has a page detailing some of the current hustles making the rounds (including the evergreen “technical support” con jobs). Installing security software (especially a program that scans incoming email for threats) on your computer and keeping it up-to-date is another line of defense.