Q. Do emoji look the same everywhere, like from Android to iPhone to Windows? And how do you get icons of people in different races?

A. The look of emoji, those popular pictographs that have become lingua franca for many people sending text messages, differs based on the software you are using. Apple’s iOS software, Google’s Android system and Microsoft’s Windows 10 platform all have their own interpretations of each emoji character — as do other phonemakers like Samsung, LG and HTC. Social media services like Facebook Messenger and Twitter have their variations, too. 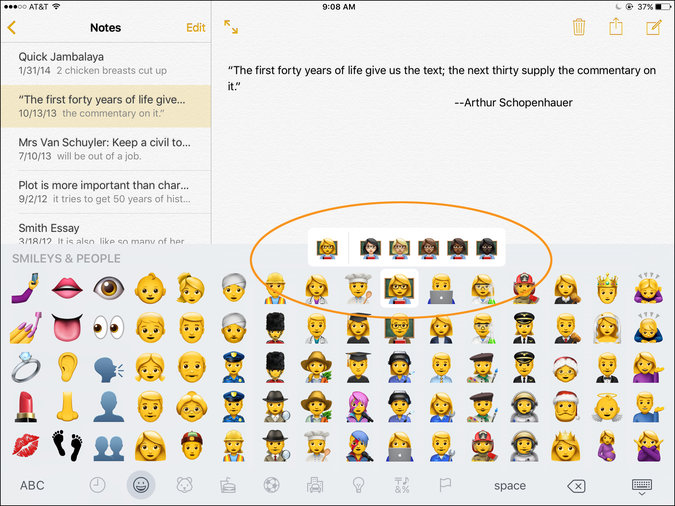 In the latest version of iOS, you can see alternate icons when you press and hold your finger down on the character set on the emoji keyboard.

While the main sentiment or action depicted by the emoji character is generally recognizable across platforms, the artistic style can be quite different. For example, Apple’s version of the smiley face character is a shaded yellow sphere revealing an upper row of teeth, while Google’s adaptation looks like a grinning yellow gumdrop.

Emoji symbols are redrawn as the character set has evolved over the years. Google updated its emoji characters last year, as did Apple. Microsoft overhauled its emoji library last summer for its latest Windows 10 update and wrote about the new design on one of its Windows blogs (the post features a frenetic animation of many of the new characters, but those prone to problems from rapidly flashing objects may want to skip the page).

If you are curious to see how each emoji symbol is rendered on the different platforms, visit the Emojipedia.org site, which catalogs a comprehensive collection of characters. Click a category listed on the page and then on a specific emoji — say, Face With Tears of Joy — to see the variations.

As for using characters that depict human figures in a range of skin tones, you can usually get to the different versions on the emoji keyboard the same way you get to alternate letter forms on the qwerty keyboard. On the iPhone, for example, press and hold your finger on a character to see a pop-up menu of the other choices. You may need the most recent version of your mobile operating system or a third-party emoji keyboard from your app store to see the most recent characters.