Q. When I retired from teaching, the school made a lovely tribute movie on an iPad. I would love a copy of the movie as a keepsake, but no one can figure out how to make a DVD for me. Can you help?

A. As versatile as it is, the iPad does not include the ability to record DVDs, so you need the right hardware and software to get the movie onto a disc. Some programs in Apple’s App Store offer to create DVDs from uploaded video, but you can also do it yourself if you have access to a computer with a DVD burner and disc-making software.

If you want to go the app route, software like Burn Video promises to take video uploaded from an iOS device and record it to a DVD for you. The App Store has other similar programs, although some may charge monthly subscription fees to regularly record iPhone or iPad video to disc. 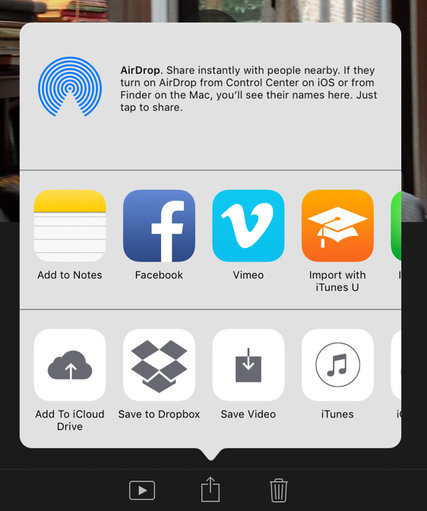 The Share icon in the iPad’s iMovie app offers plenty of places to export and save a video project.

Most video-editing programs for iOS devices offer export options that allow you to save a copy of a movie project as a file that plays outside of the app that created it.

The export options vary based on the editing software used, but Apple’s own iMovie app is frequently used for making iPad video projects and can be used here as an example. Open the iMovie app and tap the thumbnail for the project you want to export. On the project’s page, tap the Share menu icon at the bottom of the screen between the preview icon and the trash icon.

In the window that pops up, select a place to save the movie. Depending on the apps and accounts used with the iPad, choices may include online storage sites like iCloud Drive, Google Drive, OneDrive or Dropbox. If the iPad is near a compatible Mac, it is also possible to wirelessly transfer the movie to the computer with Apple’s AirDrop feature. (On a Mac, you can also open it with the desktop version of iMovie or import it through iTunes.)

From the Share menu, you can also export the movie to the iPad’s photo library with the Save Video icon. Connect the iPad to a Mac or PC with its USB cable to import the video to the computer the same way you import photos from a digital camera, through the Windows AutoPlay box (and other methods) or the Mac’s Image Capture app.

Once you get the exported file on the computer with the connected DVD burner, record the movie to a disc. A DVD-creation program can record and format the disc so that it automatically plays like a standard movie on the DVD player connected to your home entertainment center.