Q. I upgraded my iPad to iOS 10 and noticed the Videos app has been replaced with an app called “TV,” but it won’t let me play any of my videos unless I have an internet connection. Did Apple do this on purpose? How am I supposed to watch movies on a plane?

A. As announced last fall, Apple’s new TV app consolidates the purchased television shows, movies, iTunes Store rentals, home video and content from many streaming services in one place. In the United States, the TV app replaces the old Videos app when an iPad, iPhone or iPod Touch is updated to iOS 10.2.

While the TV app brings benefits like the ability to sign into services from cable or satellite television that require a user name and password in just one place (instead of within each individual channel app), iOS users have complained online for months about various bugs in the software. The inability to watch videos without an internet connection has been a frequently mentioned grievance. You can file your own report on any issues you are having with the TV app on Apple’s official product feedback page. 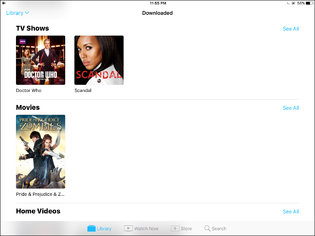 In the iOS TV app, go to the Downloaded area of your library to see and play the videos that reside locally on your device.

Before you hit the road, you should make sure the videos you want to play on the iPad have been fully downloaded to the device and are not past purchases that are displayed as part of your iTunes in the Cloud library; on the iPad version of the app, tap the Library menu button in the upper-left corner and choose Downloaded to see the files currently residing on your tablet. If you want to take a previously purchased video with you from elsewhere in your library, tap the cloud-shaped download arrow to grab a copy. (As a quick check, flip on the Airplane Mode setting and test your videos to make sure they play before you leave.)

In some situations the TV app does require an internet connection. As the central hub for all video-related files in iOS, you do need to be online if you want to stream video on the iPad from a service like Showtime or HBO Now. Movie rentals and some purchased content you have downloaded often require a quick internet check-in with the iTunes Store first to confirm your right to play the files.

Directly transferring video files to the iPad from the iTunes library on the computer may also let you avoid the internet-connection issue, but some users have reported that the TV app has had problems playing homemade movies from recordings or converted from DVDs. For watching content that does not have copy protections built in, switching to a third-party video app like VLC for Mobile (which has its own mixed reviews) might be a suitable workaround.

Many iOS users have contributed their own observations and suggestions for using the TV app. The Apple Toolbox site has a collection of tips and anecdotes on the topic if you want to tinker at your own risk, but your results may vary based on your hardware or the type of video file you are trying to play. Future software updates from Apple may also smooth out issues with the software.