The dinner was mostly me being a nervous chatterbox, trying in vain to spark conversation between two people with little in common. My mother didn’t talk much, if at all. She grew up in a different culture and a different generation. She was too polite to say it, but I know she wanted my partner to be Indian, like us. She wanted someone who understood her world. That wasn’t Michelle, or Sharon, or anyone else I had chosen. 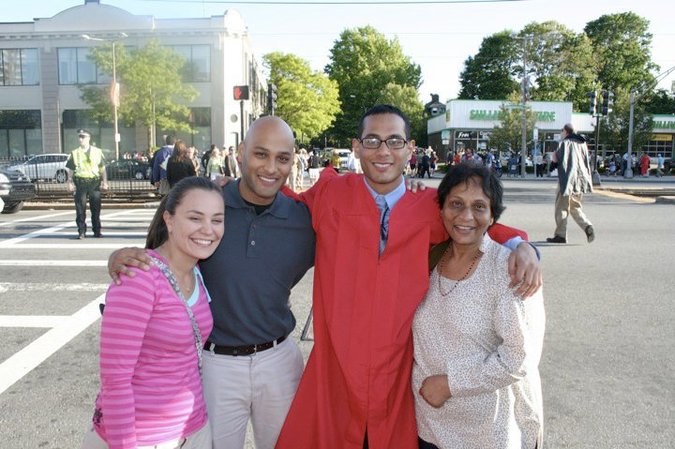 The writer (center right) with, from left, his sister-in law, his brother and his mother.

Crossing the cultural divide can be lonely, particularly when you’re growing up in a mostly white town. Especially when few television shows and films tell stories of people who look like you.

“The Big Sick” is a welcome exception.

The romantic complications of South Asian children who grow up here have rarely been displayed as vividly as in this film, which tells the story of a Pakistani comic and Uber driver in a relationship with a grad student, who is white. Starring and co-written by Kumail Nanjiani, who was born in Karachi, it explores the South Asian identity in depth, and speaks to conflicts that many of us face growing up in America.

The film is about Mr. Nanjiani’s real-life courtship, breakup and eventual marriage to Emily V. Gordon, his wife and co-author (played by Zoe Kazan). And even though no one I’ve dated fell into a coma, as Ms. Gordon did, Mr. Nanjiani’s struggle was a recognizable one.

He wasn’t the first to tell a uniquely South Asian story, of course: Kal Penn explored similar themes in the 2007 film “The Namesake,” based on the book by Jhumpa Lahiri. Ravi Patel lays this conflict bare in his 2015 documentary, “Meet The Patels,” in which he allows his parents to arrange a marriage for him, at the expense of his true love at the time, a writer named Audrey Wauchope. And there is Aziz Ansari, who stars in Netflix’s “Master of None” and dives into this subject in episodic format.

For the website Jezebel, the Brooklyn artist Aditi Natasha Kini wrote a critique of the film, titled “I’m Tired of Watching Brown Men Fall in Love With White Women Onscreen.” On Vice, Amil Niazi wrote, “I found myself growing increasingly frustrated and then infuriated with the clichéd, stereotypical depictions of South Asian women that have unfortunately become the norm in the growing onscreen narratives of brown men.”

Tanzila Ahmed, a writer for The Aerogram, a South Asian culture site, summed up the critique this way: “Once again, Muslim Brown women were crafted as undesirable, conventional and unmarriageable for the Modern Muslim-ish Male.”

The word “erasure” comes up frequently in the criticism, and it’s neither new nor unfounded. Beyond a few notable exceptions — such as Mindy Kaling in “The Mindy Project,” and “Brown Girls,” a coming HBO show featuring a Pakistani-American lead — there isn’t enough representation of brown women onscreen. Mr. Ansari faced that complaint after “Master of None” was released; his character often pursues white women.

“No ethnic requirements on any casting. We just cast the best people,” he responded on Twitter.

Ms. Ahmed also took issue with a dynamic in several American movies featuring South Asian men: “Why does there always need to be a white leading woman? Are we unable to tell Brown romantic narratives without grounding them in Whiteness?”

On one level, the evidence is clear: Many movies about interracial relationships feature white women in the lead role (and rarely have South Asian characters at all). From 1967’s “Guess Who’s Coming to Dinner” to 2001’s “Save the Last Dance,” films with interracial leads often feature a white woman with a man of color, exploring their relationship almost exclusively through a racial lens. Some casting has bucked this trend — think of Halle Berry’s Oscar-winning performance in “Monster’s Ball,” or Zoe Saldana in the remake “Guess Who” — but there is a clear pattern of idealizing white women that often comes at the expense of women of color.

For me, though, “The Big Sick” is the wrong target for this frustration.

Stories of South Asian culture are rarely given voice. We certainly need more of these, particularly from female writers and producers. But here, it is Mr. Nanjiani’s story being told — not that of a roomful of white writers looking to throw some diversity into their screenplay. He is married to a white woman. The story is about their courtship.

I didn’t see “The Big Sick” as a rejection of South Asian women, but rather a rejection of arranged marriage, a difficult and searing subject for some of us who have experienced it up close.

My parents were a terrible match. But they stayed together because arranged marriages are often transactional at first; the love, in theory, comes later. That never happened for my parents. And it took them 30 years to end the marriage, at least partially because divorce is stigmatized in South Asian culture. (Estimates for the divorce rates among Indian-Americans range from 1 to 15 percent.)

My reaction to this, admittedly flawed, was to reject the part of myself that came from India. Searching for something to blame for my family ills, I blamed arranged marriage. “How could I subscribe to a culture that forced these two together?” I would often think, silently pulling away from my roots as I entered adulthood.

Along the way, my mother did her best to keep me grounded. I took classical Indian vocal lessons. We went to annual Hindu festivals to offer prayers to various gods and goddesses. Sometimes I performed the songs I learned, but it was never quite right. (In “The Big Sick,” Mr. Nanjiani’s character fake prays to please his parents. Been there.) I never felt at home. And my parents, especially my mother, felt a profound sense of loss.

This is what I have struggled with in my 20s as I consider my brownness. When it came to marriage, I’ve thought: “If I say no to my Indian roots, I won’t have the marriage my parents had. I won’t be like that with my kids.”

Of course, Mr. Nanjiani, Mr. Patel and many, many other South Asian children who grew up in the United States didn’t have an experience like mine. For many parents, the love did come later — or they were not in arranged marriages at all.

The critique of “The Big Sick” as contributing to stereotypes of South Asian women is surely understandable. Mr. Nanjiani’s mother, played by Zenobia Shroff, lines up women for Mr. Nanjiani, hoping that he will find one of them suitable for marriage. At least one of the choices, played by an actress with an ethnic accent, can be reasonably seen as a caricature, as she tries overly hard to impress Mr. Nanjiani as a fan of “The X-Files.”

The inherent awkwardness of an arranged first date around the family dinner table is highlighted. In my eyes, the point wasn’t to relegate South Asian women to a punch line, but to add levity to a story in which Mr. Nanjiani struggles with a choice that could isolate him from his family.

When my brother, Sattik, who is 10 years older than I am, married Erica, a white woman, they had a Catholic ceremony.

My mother was devastated. She wanted an Indian wedding. I asked why it was important.

“Because we are Indian. I am Indian,” my mother said. South Asian weddings, generally, are about a marriage of two families, rather than two individuals. My brother’s wedding went on, but my mother never fully embraced the nuptials.

“Shambo, I want you to have an Indian wedding to an Indian girl,” my mother said to me, using a childhood nickname. I was 19 at the time and thought, “Not gonna happen.”

I was frustrated and baffled by her mind-set. I am sure she felt the same about mine.

I have since dated South Asian women and been very happy. I may very well marry one and have the wedding my mother wants for me. But if I do, it will be because the woman is someone I want to be with, and who wants to be with me.

Mr. Nanjiani’s film explored that freedom to choose — one brown guy’s experience crossing the chasm between two very different cultures. Faulting him for telling his story feels like a kind of erasure, too. I am also not going to deprive Ms. Gordon her due, because it is her story as well.

Rather than criticizing the film for what it is not, I appreciate what it offers: a clear, illuminating reflection of the world that I grew up in, a world that few outsiders see.

And on the other side, my parents have gradually inched across the divide, accepting more of the cultural differences, as Mr. Nanjiani’s parents ultimately did.

They have even asked — ever so gingerly — who I am dating.