“Do you want to have lunch with John in his trailer?”

I looked over to where Frankie was pointing and saw John hauling himself up into the door of his gleaming trailer in his full-fur Mog suit, minus the headpiece. I didn’t know if I’d be up to the bantering he traded on the set with the other lead actors. My first inclination was to say no but suddenly heard myself say with false cheer, “Sure.”

As I got closer, I heard John shout out, “Get in here Pullman, I’m starving for my Pritikin Diet Soup.” Frankie rolled his eyes at the mention. Inside he went to work heating up a thin chicken broth with a few stiff, floating strands of noodle. I was being introduced to a ritual with endless variations: John would chuckle and rib Frankie, Frankie would roll his eyes, John would find one way after another to curse the diet.

John’s humor was wry, and he loved to deflect any emotional baiting. Recalling one moment on the set, he included an observation of me: “And you, Mr. Still Waters, Mr. Smiling-on-the-Outside, you had it all figured out and stayed out of it.” He was both calling me out for being quiet and making me feel noticed, secure. He delivered this with a round-cheeked grin and a mischievous brown-eyed wink. I think I said, “I’d like to think so.” 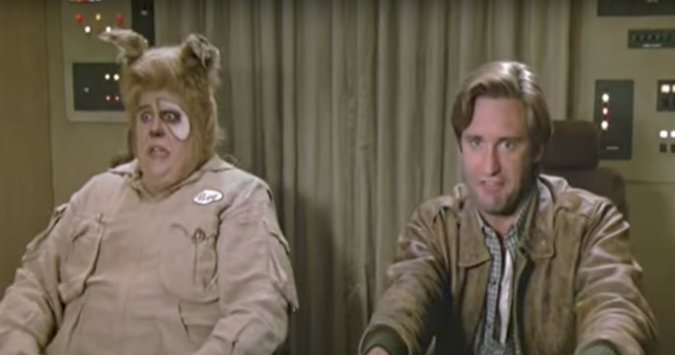 A production assistant knocked on the door to give us a “we’re-back-in-five.” As John was gathering himself to leave, Frankie pulled out a variety box of a dozen doughnuts: “Boss, you said something about these.” John didn’t miss a beat as he grabbed one and pushed the box my way: “For your blood sugar, Pullman. I see you yawning.” We were co-conspirators now.

The lunches with John and Frankie continued from time to time. But the moment that has turned out to stay with me happened during a crisis for me on the set. We had been working out dialogue for a march into Yogurt’s Grand Hall. It was Princess Vespa, Dot Matrix, Barf and me, with Mel directing. Rounding a corner to face the altar of Yogurt wasn’t just a key story point; it was also a homage to Dorothy and gang going to face the Wizard of Oz.

John was feeling that, as scripted, most of the funny lines were being given to Barf, and he suggested I might take one of the wisecracks. A certain silence suddenly dominated the sound stage. Mel paused.

Now Mel had been, and would continue to be, as generous as any director that I’ve ever worked with. But something about the circumstances made him want to use his metaphorical light saber. Maybe it was because we were on one of our most elaborate sets, with several camera crews buzzing around us. He was the writer and the director, and a gentle giant of modern comedy wanted to give away a line that Mel had provided for him.

“You think Pullman can make the line funny? Pullman? O.K. Back to one.”

We all went back to our start marks and ran through the three-minute sequence, crew and cast making for a lot of moving parts. After a silence following “Cut,” we heard Mel say: “O.K. We are cutting that line. Back to one.”

Later I was disappointed that I had allowed Mel’s snap to fill me with shame and frustration. In the moment, as we all reset for another take, I must have looked like I was stewing.

I felt the arm of the Mog drape around my shoulders. John leaned in. “Pullman, how about another doughnut?” He continued: “You’d better not look so red right now. And don’t go blue on me later.”

His chuckle and wink calmed me down. I did eventually manage to recalibrate. And the next day, Mel met me with a hug.

I have never forgotten John Candy’s generosity. He showed me how to be a gentle leader. He lightened my load.

He had my back.