The risks mounted steadily throughout this past week. The insurance and health care industry cited likely damage to medical coverage for millions of Americans. Conservatives fought the bill on the grounds that it did too little to reduce subsidies. And House leaders moved forward even though the influential Congressional Budget Office has yet to assess the costs or effectiveness of the plan.

Ultimately, Republicans are counting on Democrats to step in and help repair what even Republicans anticipate as upheaval if a repeal measure is passed without a broad remake of American health care.

Republican leaders have made no effort to hide the strategy. House Speaker Paul D. Ryan spoke at length this past week about a three-stage effort: First, with only Republican votes, repeal major parts of the health law and put in place some new provisions. Second, let Health and Human Services Secretary Tom Price use regulatory powers to try to stabilize insurance markets. Third, pressure Democrats to help with a series of bills to complete the replacement and change the health care system more to the liking of conservatives. 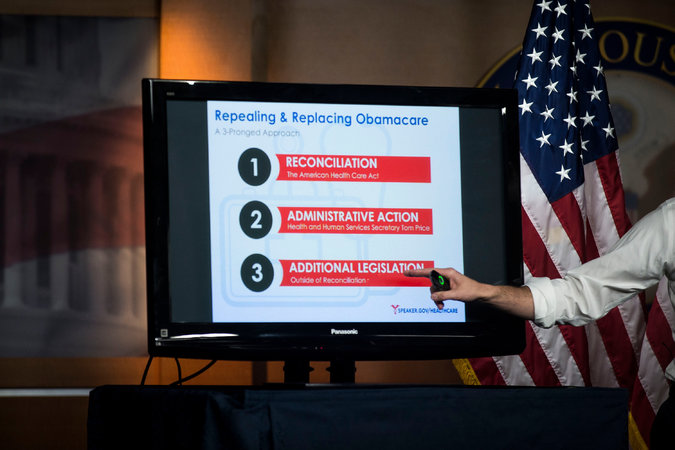 But that bet carries enormous peril for consumers and insurers — and congressional Republicans and the Trump administration.

Democrats, eyeing potential turmoil in the run-up to the 2018 midterm elections, have little political reason to cooperate. “One thing is clear,” said the House Democratic whip, Representative Steny Hoyer of Maryland. “House Republicans are going to have to find the votes on their own to dismantle the protections incorporated in the Affordable Care Act that the American people now have.”

A growing chorus of Republican policy experts and senators are pleading to slow the process down or risk a political blood bath.

But Republican leaders and Mr. Trump appear to be laying the groundwork for blaming the law they are annulling for the fallout likely to come in the repeal’s wake.

Mr. Trump asserted on Friday that 2017 would be “a disaster” for the health law. “That’s the year it was meant to explode, because Obama won’t be here,” he said, adding that “as bad as it is now, it’ll get even worse.” On Saturday, he took to Twitter: “ObamaCare is imploding and will only get worse. Republicans coming together to get job done!” And Vice President Mike Pence traveled to Louisville, Ky., on Saturday to assure residents that “the Obamacare nightmare is about to end.”

What is clear is that 2018 — a year that Republicans say will be messy — will loom large for them as they move toward a vote on the measure. But Republicans say that gives them nearly a year of time, since people will experience few changes with their health care in 2017.

Under the proposed House legislation, individuals would no longer be subject to a penalty if they go without health insurance, a politically popular change that would be retroactive to 2016. But they would still enjoy the protections of the Affordable Care Act: Insurers would have to offer a suite of essential health benefits, could not deny them coverage because of pre-existing conditions and could not impose annual or lifetime caps on coverage.

Insurers would be free to raise their premiums to meet these requirements, but because current policies are locked in for the year, voters would not see the effects until 2018. If young, healthy Americans flee the market, freed from the mandate, premiums could soar next year.

Insurers say this is a recipe for havoc. Eliminating the penalties used to enforce the mandate that most Americans have insurance “would add to short-term instability in the market,” said Marilyn B. Tavenner, the chief executive of America’s Health Insurance Plans, a lobby for insurers.

Instead of the current tax penalty for failing to secure coverage, the bill would introduce a penalty for purchasing insurance after letting coverage lapse: To encourage people to maintain “continuous coverage,” insurers would impose a 30 percent surcharge on premiums for people without coverage for 63 days or more.

But that provision would not take effect until 2019 — again leaving 2018 unprotected.

All of that has created immense uncertainty for insurers, which have until June 21 to notify the government if they intend to participate in the federal insurance marketplace next year.

“The current uncertainty makes it difficult to assess what our product offerings for 2018 might be,” said Roy D. Vaughn, a senior vice president of BlueCross BlueShield of Tennessee, which has lost more than $400 million in the federal insurance exchange in the last three years. “All options are on the table for 2018.”

For all those worries, the Republicans’ repeal campaign did gain momentum this past week as two House committees approved the legislation, with the full House expected to take it up later this month. Mr. Trump praised the legislation, even as it was harshly criticized by doctors, hospitals, insurers and state officials, who said it could increase the number of uninsured and destabilize insurance markets. The Congressional Budget Office is expected to render its verdict on the legislation this coming week, with an estimate of the bill’s costs and its effect on coverage. Republicans are bracing for bad news.

Deep Banerjee, who follows insurers for Standard & Poor’s, estimated that the Republican plan would reduce enrollment in the individual market by two million to four million people and in the Medicaid market by four million to six million. Brookings Institution analysts predicted that the budget office would expect the bill to cause the number of uninsured to rise by at least 15 million.

“Republicans do not currently have the votes to pass their health care bill in the House,” said Kim Monk, a health care analyst at Capital Alpha Partners, a policy research firm for investors. But she sees a 60 percent likelihood that they will clear that hurdle.

“Republicans campaigned on ‘repeal and replace,”’ said Ms. Monk, a former Senate aide. “If they do not deliver, the Affordable Care Act will stay in place, and Republicans would pay a price in the next election.”

The bill may need to move to the right to get through the House, where a formidable bloc of conservatives wants more aggressive steps to rein in the growth of Medicaid. But to win approval in the Senate, the bill may have to move in the opposite direction — to satisfy more moderate Republicans and those from states that have expanded Medicaid, like Ohio and Colorado. At the same time, three Republican senators — Ted Cruz of Texas, Mike Lee of Utah and Rand Paul of Kentucky — will be tugging the bill to the right.

The Senate majority leader, Mitch McConnell of Kentucky, is determined to secure repeal of the Affordable Care Act, which he has called “the single worst piece of legislation that has been passed in the last half-century.”

But several provisions of the bill, including proposed cuts in Medicaid, face resistance from health care providers, especially hospitals, which are present in virtually every congressional district and plan an all-out lobbying campaign. In addition, Democrats are gaining some traction with their argument that the bill acts like Robin Hood in reverse, taking health insurance from the poor and giving tax breaks to the rich.

On the other hand, Mr. Trump has successfully defied conventional wisdom before. His Twitter-fueled ability to command a spotlight could be a formidable asset as Republican leaders try to collect votes for the health care bill.

For health policy experts, liberal and conservative, the rush to enact a measure that even its authors concede is incomplete is dangerous. On Friday, two conservative critics of the Affordable Care Act, Joseph Antos and James C. Capretta, urged Republicans to slow down and get their health legislation right.

“While the emphasis on moving quickly is not surprising, there is also a significant risk that unnecessary haste could lead to major mistakes in the legislation that would generate strong political backlash,” wrote Mr. Antos and Mr. Capretta, scholars at the American Enterprise Institute. “The A.C.A. has extended insurance coverage to millions of people with expensive health problems, and to many lower-income households. Acknowledging this is not the same thing as saying the A.C.A. should not be changed.”