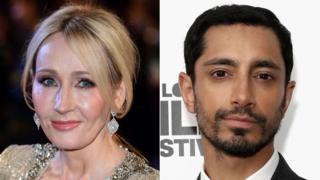 JK Rowling publicly backed the book, which includes Riz Ahmed among its contributors

A collection of essays about race and immigration in modern Britain has been voted the best book of the year.

It was named winner of the Readers Choice Award at the inaugural Books Are My Bag Readers Awards, which received votes from more than 50,000 people.

The book was partially crowdfunded, with author JK Rowling donating £5,000.

Author Nikesh Shukla, who edited the collection, said it was “amazing” to win an award decided by readers.

Ahmed’s essay, printed in The Guardian earlier this year, told of his experiences being stopped and interrogated at airports.

The actor was seen in cinemas this year in Jason Bourne and has a role in the upcoming Rogue One: A Star Wars Story.

Other winners included Bill Bryson, whose The Road to Little Dribbling: More Notes From a Small Island won the biography and autobiography award.

The Detective Dog, by Julia Donaldson and Sara Ogilvie, received the children’s prize, while Sarah Perry’s The Essex Serpent won the “beautiful book” award for its eye-catching cover.

The awards were presented in London on Thursday by actress and writer Meera Syal.