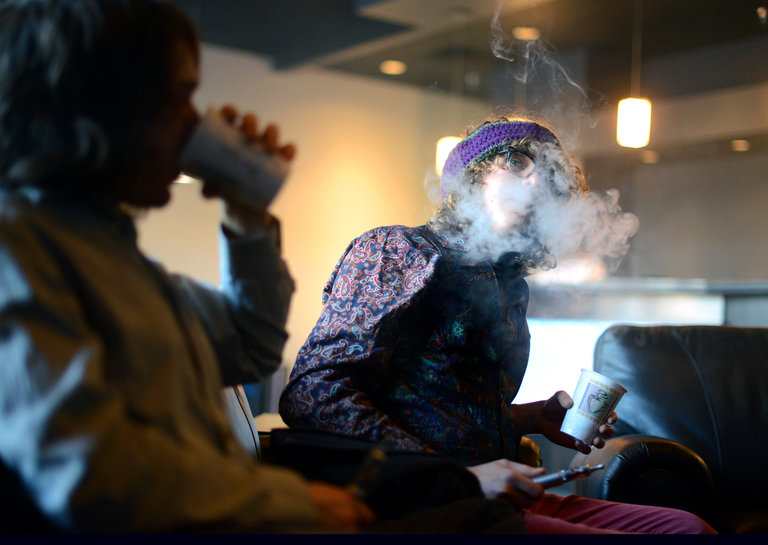 The use of e-cigarettes by adolescents has increased sharply in recent years.

People get hooked on cigarettes, and enjoy them for that matter, because of the nicotine buzz. The nicotine doesn’t give them cancer and lung disease, though. It’s the tar and other chemicals that do the real harm.

Last week, the Food and Drug Administration issued new rules on e-cigarettes, banning their sale to anyone under 18 and requiring that adults under the age of 26 show a photo identification to buy them.

Electronic cigarettes carry the promise of delivering the nicotine without the dangerous additives. The use of e-cigarettes by youth has increased sharply in recent years. In 2011, about 1.5 percent of high school students reported using them in the last month. In 2014, more than 12 percent of students did. That means that nearly 2.5 million American middle and high school students used them in the past month.

The problem is that nicotine is generally considered less safe for children and adolescents than for adults. Poisoning is possible. It’s thought that nicotine may interfere with brain development. Most worrisome, it’s believed that becoming addicted to nicotine in any form makes smoking more likely later in life.

E-cigarettes are perceived to be less harmful than conventional cigarettes, and they are thought to be useful aids to quitting. These perceptions, however, are not always fully grounded in evidence.

There’s enough research about e-cigarettes to have warranted a number of systematic reviews and meta-analyses. A 2014 study in the journal Circulation analyzed the data from a number of angles. For instance, researchers found that the aerosol from e-cigarettes was significantly lower in toxins than from conventional cigarettes, although toxins could be detected. Those exposed secondhand were also at much lower risk from e-cigarettes than from traditional ones, though some risk might still exist.

In other words, we shouldn’t believe that e-cigarettes result in the inhalation of “harmless water vapor,” but we can accept that they are most likely much safer than conventional cigarettes.

Another review published later that year came to somewhat similar conclusions, and noted that at least a third of the scientific articles on the topic had authors with conflicts of interest. It also reported that studies found worrisome compounds in the aerosol, especially in the flavorings and propylene glycol, which is often added as a humidifying agent. The authors concluded that e-cigarettes can’t be deemed safe, though they are less harmful than conventional cigarettes. I conducted my own mini-review a couple of years ago and came to the same conclusion.

Many of them have argued that e-cigarettes can help people to quit smoking cigarettes, much as nicotine patches or gum do. A 2015 study in PLoS One reviewed the evidence. Among 1,242 smokers of e-cigarettes, 18 percent reported quitting conventional cigarettes for at least six months, which was significantly better than those using placebos without nicotine in them. E-cigarette use was also associated with a reduction in the number of cigarettes smoked per day. Only two studies were randomized controlled trials, however, and they were of mixed quality.

Most important, these studies could not compare the usefulness of e-cigarettes for quitting against other measures, like medications or nicotine replacement therapy. It’s possible that those are more powerful.

I admit to being conflicted here. Of course, I’d rather no adolescents use either conventional or e-cigarettes. But I am somewhat swayed by the argument of e-cigarettes for harm reduction.

Years ago, pediatricians used to urge parents to quit smoking because of the health risk for their children. Then, enterprising researchers showed that if smoking parents would just agree to smoke several yards away from their infant, it could reduce hospitalization of infants in their first 18 months of life significantly. Now pediatricians still exhort parents to quit, but they also talk about smoking outside, away from babies. We don’t want to make the perfect the enemy of the good.

And, of course, most pediatricians would encourage adolescents to use condoms if they have sex rather than preach abstinence-only. We recognize gray areas when it comes to discussing harm reduction.

One question that few want to consider, however, is whether we’d rather young people smoke conventional cigarettes or e-cigarettes. Neither would be preferable. But a recent study in The Journal of Health Economics forces us to think about this dilemma.

Cigarette sales to minors have been dropping throughout the country for more than a decade. But in the states that introduced bans on sales of e-cigarettes to minors, the decrease in conventional cigarette use slowed significantly. In other words, more children still smoke conventional cigarettes in states that banned e-cigarettes than would be expected by looking at states without bans. The study author argues that banning e-cigarette sales to minors might increase teen smoking over all.

The overall goal should be to get children and adolescents to quit all types of smoking. Banning sales of e-cigarettes to minors may help achieve that goal, but it’s also possible it may backfire.