In Oregon, the first state to legalize aid in dying, the handful of patients using the law had been white and well educated, the author noted in an epilogue, leading him to wonder “whether assisted suicide is a matter of necessity or more of a lifestyle choice by people who have always tended to control their lives and now wish to control their death.”

(Even the terminology is perilous. The phrase “assisted suicide,” now used mostly by opponents, tends to signal disapproval. For a while, supporters preferred “death with dignity.” At least “aid in dying” doesn’t imply that those who die without lethal prescriptions lack dignity.)

Judge Gorsuch’s position is creating anxiety in a movement that recently celebrated victories in several states and expressed optimism about winning more. “He has revealed tremendous personal hostility,” said Kathryn Tucker, executive director of the End of Life Liberty Project.

“I can’t think of any other justice who has written so much on the subject or is so opposed,” said Kevin Diaz, legal director of the advocacy group Compassion & Choices.

As an Antonin Scalia-style originalist, Judge Gorsuch presumably would find constitutional only those rights actually addressed in the Constitution or determined to be in the framers’ minds when they wrote it. Neither the document nor its authors had anything to say about a right to hasten one’s death with lethal medication when terminally ill.

Yet supporters of aid in dying don’t sound as despondent as one might expect, even if Judge Gorsuch is confirmed. Why? They don’t see the issue coming before the Supreme Court anytime soon.

The court has already weighed in, twice. In 1997, the justices heard combined cases from Washington State and New York brought by doctors and dying patients who claimed a constitutional right to physician-assisted death — and ruled unanimously against them.

“This is not an area of law with a sharp liberal-conservative divide,” said Michael Dorf, a constitutional law professor at Cornell University. “Even the liberal justices rejected the argument that there’s any constitutional right to physician aid in dying.”

But the ruling didn’t prohibit — and even seemed to encourage — individual state efforts to wrestle with the question. As Chief Justice William H. Rehnquist wrote, the decision “permits this debate to continue, as it should in a democratic society.”

Oregon enacted its Death With Dignity law that year. The Bush administration tried to block it by depriving participating doctors of their federal licenses to prescribe controlled substances, but the Supreme Court slapped down that argument, 6 to 3.

Five other states (Washington, Montana, Vermont, California and Colorado) and the District of Columbia have since legalized aid in dying through legislation, referendums or court cases. And state courts are where the legal action is likely to remain. 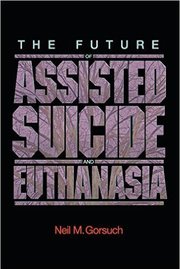 “The Future of Assisted Suicide and Euthanasia” by Neil M. Gorsuch.

“Proponents of aid in dying, like proponents of other progressive views of the Constitution, are going to stay the heck out of the U.S. Supreme Court,” said Vincent Bonventre, a constitutional law professor at Albany Law School in New York.

“They have a much, much better chance of getting aid in dying recognized as a protected right by going to some state supreme courts around the country.”

One area where Judge Gorsuch might have influence, Mr. Diaz said, is in religious-exemption cases. As an appellate court judge hearing the Hobby Lobby case, Judge Gorsuch argued in a concurring opinion that employers with religious objections could decline to cover contraception as part of workers’ health insurance. The Supreme Court later agreed.

In Vermont, two medical groups have challenged the state’s aid-in-dying law, saying that if doctors decline to participate on religious grounds, they should not have to refer patients to other providers or mention the option at all.

Because it’s being heard in a federal court, Mr. Diaz said, that case could eventually reach the Supreme Court. But even a decision for the plaintiffs wouldn’t overturn aid-in-dying laws altogether.

As a practical matter, groups advocating the cause find themselves in state courts almost continually. Montana residents can seek lethal prescriptions at the end of life because the state’s Supreme Court ruled in 2009 that no state statute outlawed it; New Mexicans have no such legal option, after that state’s Supreme Court last year declined to find aid in dying constitutionally protected.

(A newly enacted District of Columbia aid-in-dying law stands for now. Congress adjourned this month without approving the resolution that would have blocked it.)

Supporters often fight rear-guard legal actions. In California, for example, groups have sued in state court to stop the new End of Life Option Act, which took effect in June.

In other states, though, it’s supporters of aid in dying who turn to the courts. In Massachusetts and Hawaii, physicians and patients have filed suits arguing that (as in Montana) the practice is not outlawed by state statute and should be legal.

In 2015, New York patients and physicians brought the Myers case, named for a Manhattan resident, Sara Myers, who had amyotrophic lateral sclerosis, or Lou Gehrig’s disease.

Lower courts dismissed the suit, but the Court of Appeals, the state’s highest, has agreed to hear arguments, expected this spring. (Ms. Myers has died in the meantime.)

Should the New York court — or any state high court — find aid in dying protected under its state constitution, it won’t matter who sits on the Supreme Court.

“The Supreme Court doesn’t have the right to review that,” because it doesn’t involve interpretation of the federal Constitution, said Mr. Dorf, who has worked on an amicus brief in the Myers case on behalf of law professors. “New York is the final arbiter.”

New York’s highest court has national clout, said Edward Mechmann, a lawyer who is also filing an amicus brief in the case as public policy director for the Archdiocese of New York. If the justices were to find aid in dying legal, “I think it would be very influential, judicially and legislatively,” he said.

It is not impossible that an aid-in-dying case could wend its way to the Supreme Court, Mr. Bonventre pointed out. It might involve a patient or doctor in a military hospital or other federal installation, for instance. In that case, Judge Gorsuch could have considerable impact. (Mr. Diaz argues that having denounced the practice in his book, Judge Gorsuch should recuse himself.)

Years hence, if additional states have adopted aid-in-dying laws and the Supreme Court looks more hospitable, advocates might actually want to bring a federal case that could establish constitutional protection in every state.

But for now, said Ms. Tucker, lead counsel in the Myers case, “citizens nationwide who care about individual liberty — reproductive rights, gay rights, end of life — need to look to state high courts to be their guardians.”

An earlier version of this article misstated the type of opinion Judge Gorsuch wrote in the Hobby Lobby case. He wrote a concurring opinion, he did not write a dissent.