“He’s desperate to win,” said Jonathan, who has won on the last two seasons of the show. “I was also born first, so I also won that competition,” he said, a joke typical of the brothers’ repartee both on- and offscreen. 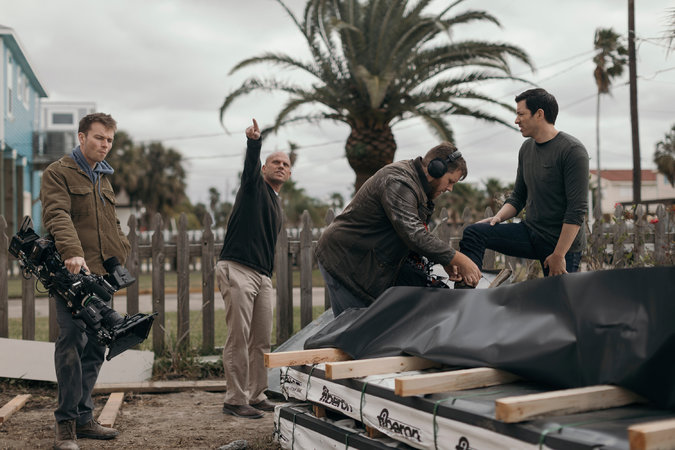 Drew Scott of the Property Brothers, far right, preparing to shoot a scene for the fifth season of “Brother vs. Brother.”

Around the corner, in a different bayside house sitting high up on stilts, Drew was dealing with dislodged materials for his own renovation. The day before, strong winds had ripped a thin metal chimney from the roof. It had landed to the side of the driveway. Now it was time to recreate the scene. “This is a high-intensity moment,” a production assistant whispered.

The director called to the house, “I need some workers out front!” A crew of tradesmen walked out onto a second-floor porch and pretended to work.

Drew ran from the house. He looked at the chimney with feigned shock. He rubbed his eyes.

“Let’s do the run out again,” the director said.

Drew walked back inside and ran out again. He pretended to notice the chimney again, and looked up toward the workmen. “Go inside, guys! I don’t want you to work outside; it’s too windy!”

The workers went back inside, and then came back out, and went in, for a third take.

At a time when politics have riven the nation, an old-fashioned, wholesome shelter show is something many can agree on. In seven years, Drew and Jonathan Scott, 39, have gone from aspiring celebrities on a small Canadian cable network to HGTV headliners who star in, and in some cases produce, some of the most popular television shows in America.

They know that some of their fans are supporters of President Trump, but Jonathan is not a fan. “I believe our show is about finding solutions for the little guy, and I think the current administration is doing stuff that is counterproductive to serving the little guy,” he said.

Property Brothers programming is now international, on the air in more than 150 countries. The brothers live in a constant cycle of product promotion and never tire of posing for selfies with fans from San Antonio to Singapore, where they were met by thousands when they visited. This was initially a surprise to them, since Asian housing stock and ways of living differ so greatly from those of North America. But, Jonathan pointed out, “Everyone lives somewhere.”

In their hallmark show, “Property Brothers,” Drew, a real estate agent, helps a family buy a new home and Jonathan, a construction contractor, helps them renovate. It is among HGTV’s highest-ranking programs. The last season of “Brother vs. Brother,” which is produced by Scott Brothers Entertainment, drew more than 14 million viewers. These are just two of their HGTV programs.

Their shows are part of a popular HGTV lineup which includes “Flip or Flop,” with Tarek El Moussa and Christina El Moussa, and “Fixer Upper,” with Chip and Joanna Gaines, who appeared on the cover of People magazine last October, before the Scotts’ first cover in April. “No, we’re not jealous of them,” Drew said. “They are phenomenally successful, the audience loves them and our fans have been asking for us to do something together.” The Scotts asked the Gaineses to appear on an episode of “Brother vs. Brother” in Galveston, but they were busy.

In the past, other HGTV stars have popped up; Rob Van Winkle (also known as Vanilla Ice, who stars in the HGTV show, “The Vanilla Ice Project”) appeared in an episode called “Nice, Nice Baby.”

The Scott brothers have numerous brand extensions, many of which fall under their Scott Living company: wine fridges and electric fireplaces, sold at Lowes, and indoor-outdoor rugs and patio furniture, sold through QVC, to name a few. There is a new luxury-home building project in Las Vegas. They released two country music songs, which they promoted on “Property Brothers at Home on the Ranch.” They have a book coming out in September from Houghton Mifflin Harcourt called “It Takes Two: Our Story.”

Though both brothers are constantly promoting themselves, they agree that Drew is more high-strung, a man who took a conference call while atop the Eiffel Tower, and who won’t attempt a leisure activity without taking lessons (currently: Ping-Pong, guitar and golf).

“I’m very good at relaxing,” said Jonathan, who comes off as a Type A-minus at best.

They are the first to admit that their family and work lives overlap more than most. Drew is engaged to marry Linda Phan, the creative director of Scott Brothers Entertainment, and the coming season of “Property Brothers at Home: Drew’s Honeymoon House” will feature the couple as they renovate their first home together, in Los Angeles. Jacinta Kuznetsov, Jonathan’s girlfriend, also works for the company. A third brother, J. D. Scott, works as the host of HGTV’s online coverage of life behind the scenes on “Brother vs. Brother.”

The Scotts’ mother and father are involved in the family business too.

Jim Scott, 83, immigrated from Scotland, eventually settling in western Canada, where he worked as a horse stuntman, then as a director’s assistant on the set of Hollywood movies shot on location near Vancouver. He has told his sons about an idea for a film in which a cowboy is unjustly sent to prison and struggles to adapt to a changed world upon his release. His sons gave him a deadline, and he wrote the screenplay on a typewriter. They say they plan to produce the film one day.

Joanne Scott, 73, spends a lot of time following her sons on social media platforms and looking for comments left by followers that might be off-Scott-brand. “If there is anything I think needs their attention,” she said, “I’m on the phone.”

The Scott brothers realize that their wholesomeness is the key to their appeal. “It’s safe programming,” Drew said over a gluten-free lunch quickly eaten amid the filming of “Brother vs. Brother.” “The shows are not so foofy that guys don’t want to watch, kids want to watch because we’re goofy and women appreciate it because you’re getting real design knowledge.”

They say they are basically just ordinary folks. “People think because you’re a celebrity, because you’re on TV, because you’re People magazine’s Sexiest Men Alive, things like that, that we’re bathing in champagne and taking limos door to door. But we’re literally the same guys, just with much busier schedules,” Jonathan said, as he drove both brothers back to their respective house-renovation sets in his Chrysler 300.

They do, however, enjoy many perks. Just a few days before Barack Obama left the White House, the brothers took a private tour of the Oval Office and West Wing. (“There is a lot of great character you would want to keep,” Drew said, “but there are a lot of things that are due for an update.”) They recently visited NASA and experienced virtual reality with astronauts. While filming in Galveston, they took in a Houston Rockets game and played Ping-Pong with the team’s general manager.

When they were children, they said, they performed frequently in comedy and improv, and as clowns for hire. The brothers began buying, renovating and flipping real estate when they were 18. The idea was to use real estate as a vehicle to finance careers in entertainment.

In 2009, producers in Canada saw an opportunity to get in on the reality TV real estate boom. The pitch, Jonathan said, was “two good looking guys in tight jeans doing home renovations; we said, ‘Sure, we’ll do that.’” The show aired on Canadian cable in 2010 and in 2011 was picked up by HGTV.

Their ambitions go much further than posts and beams.

They would like to do a talk show, and say they have been approached by “several big broadcast networks” but don’t think the timing is right. Jonathan said he was “very into conservation and solar energy.” He has written a documentary series about renewable energy, and would like to write more in the future, moving beyond his usual output of “inspirational things and cheesy things for our fans.”

Drew would like to resume his acting career, but time has been short. He and Jonathan had cameo roles on the USA Network’s “Playing House,” and say they have been offered guest roles on shows like “Castle.”

Together, the brothers have also written two screenplays, which they plan to produce (in addition to their father’s cowboy picture). The first one they would like to make, Jonathan said, is “a dark comedy that follows the life of a professional ‘hook up’ artist as he discovers his own loneliness through the romantic misery of others — it’s kind of like ‘Hitch’ meets ‘The Hangover.’” Another, he added, “is about a band of brothers who come from a small-town upbringing with wholesome values.”

Who might they envision playing the lead roles? Originally Drew envisioned his brother and himself as the stars. But what he really wants to do is direct.