The stats back him up. In addition to releasing the popular “Lil Boat” and “Summer Songs 2” mixtapes, filled with his taffylike digital wails and cartoon melodies, and reaching No. 5 on the Billboard Hot 100 with his sweet-and-sour guest verse on D.R.A.M.’s “Broccoli,” Lil Yachty has modeled Kanye West’s Yeezy line at Madison Square Garden, starred in a Sprite commercial with LeBron James and teamed up with Nautica on a capsule collection for Urban Outfitters. An official debut album with Capitol Records is planned for early 2017.

Yet even among the bevy of singular voices in the new Atlanta hip-hop scene, where male rappers can wear dresses and carry designer bags, moan about their feelings and dance with their hips, Lil Yachty is demonstrably odd, flaunting his indifference to rap traditionalism and aiming to remain somewhat wholesome: more schoolyard than trap house.

Instead, Lil Yachty preaches an all-purpose positivity fueled by timeless adolescent ambitions: chasing girls, looking cool and hanging out with friends. (Lil Yachty’s crew is known as the Sailing Team: “If you’re a fan of me, then you know my friends, because I push them just as hard.”) His most menacing raps can feel playful, his sexuality disarmingly juvenile and his boasts betray his age: “Parents mad at my ass ’cause their kids sing my song in class,” he taunts while proclaiming himself the King of the Teens. “We are the youth!” goes another battle cry.

As with his breakout viral hits “1 Night” and “Minnesota,” Lil Yachty’s music relies less on technical rapping than on simple melodies that invoke warped nursery rhymes, with bright, bubbly production and an affecting falsetto smoothed with Auto-Tune. Along with Kanye West and Kid Cudi, both of whom count as elder statesmen to someone born in 1997, his most direct influences include the cult-favorite, outre internet rappers Lil B and Soulja Boy, along with pop acts like Coldplay, Daft Punk and Fall Out Boy.

While modeling for Nautica last month to his own personal playlist, Lil Yachty mimed air guitar to “Paradise City” by Guns N’ Roses and boogied to Elton John’s “Bennie and the Jets” when he wasn’t belting Chris Martin ballads. Between looks, he dined on his preferred menu of Domino’s pepperoni pizza, candy and cookies, head buried in his two Louis Vuitton-cased iPhones. (One had a hand-scrawled message: “LETS BE RICH FOREVER.”)

At the same time, Lil Yachty’s stated indifference toward the catalogs of Tupac and the Notorious B.I.G. has made him a punching bag for rap purists, the poster child for a style-over-substance new school dismissively dubbed “mumble rap.” He’s leaned into that mantle, so online schadenfreude bubbles up every time Lil Yachty, say, bombs a freestyle over ’90s beats or fails miserably at dunking a basketball.

“I ask myself all the time, ‘How do I always go viral?’” Lil Yachty said with a grin. “I’m the face of the youth, the new sound. Nobody likes my truth.” Except the youth, that is. “They relate to me because I’m so like them,” he said, “but on a global scale.” 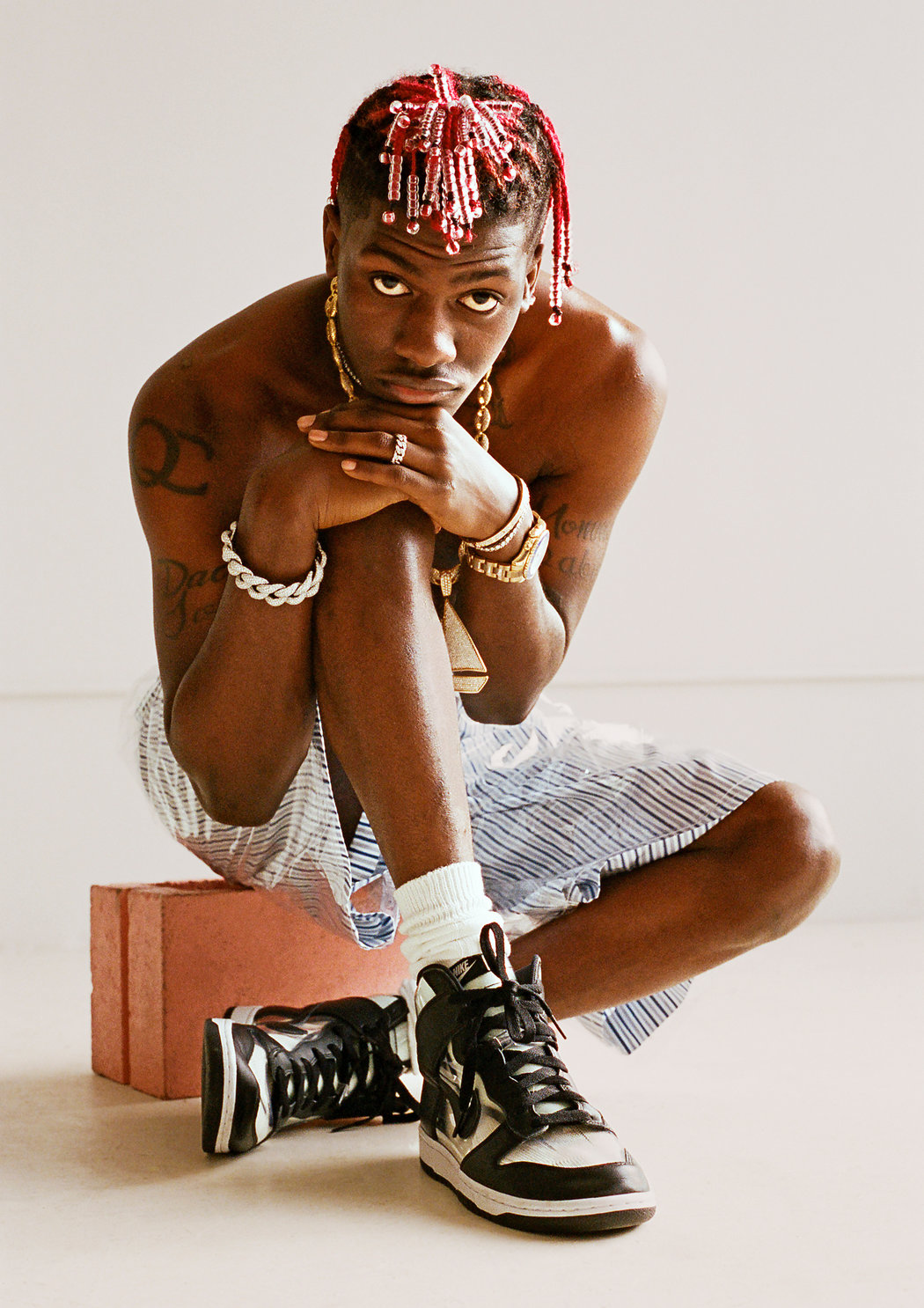 Music, it turns out, was something of an afterthought, despite his deep roots in Southern rap. Though he was raised mostly by his mother in the Atlanta suburb Austell, his father, Shannon McCollum, lived in the city and worked as a photographer with local acts such as Outkast, Goodie Mob and Lil Jon. But hanging around stars as a child bolstered Lil Yachty’s sense of style and business acumen more than his sense of hip-hop history.

“I would let him help direct photo shoots, and I would always show him my invoices so he could see what I made,” Mr. McCollum, 46, said. “I used to photograph Miles every week. By 3 or 4, he was so comfortable in front of a camera.”

An obsession with fashion followed. “Once, when he was about 7, we were picking up his friend, and Miles had on a pink polo shirt,” his father recalled. “The little boy got in the back seat and started laughing uncontrollably at Miles, calling him a girl. Miles just said, ‘You don’t know nothing about this, man.’”

In high school, influenced by the bright colors favored by Pharrell Williams and Tyler, the Creator, Lil Yachty would spend the money he earned working at McDonald’s or as an assistant to his father at thrift stores. “Ninety-nine cents, 50 cents, I just knew how to put it together,” he said. His mother even taught him to sew.

His confidence and originality helped to win over his eventual manager, Coach K, an Atlanta stalwart who has worked with Young Jeezy, Gucci Mane and Migos. “It was like your first meeting with Marilyn Manson,” Coach K said of encountering Lil Yachty. “You’ve got this freakish look, but he’s not scared of who he is. He’s wearing it with pride. Instantly I said, ‘This is it.’”

Lil Yachty had already determined that packaging a mystique was his strong suit. After graduating from high school, he traveled repeatedly to New York and Los Angeles — his father’s day job at Delta gave him access to free flights — where he slept on couches and worked to ingratiate himself with rap-adjacent tastemakers like Ian Connor and Luka Sabbat.

“I was simply trying to get people who had an audience to hang out with me, so that I could get that audience,” Lil Yachty said. “I was making music, but I wasn’t really pushing it yet. I knew exactly how it worked.” He corrected himself. “I know exactly how it works.”

Still, even he has been surprised by the speed of his ascent.

“It just feels like a dream,” he said, recalling that in January, he couldn’t make it past the door of Kanye’s studio. “I sat in the hallway for hours while ASAP Rocky was in there. They wouldn’t let me in. By August, I was working with him.” Nautica, too, came calling only after a year of Lil Yachty’s attempting to get the maritime brand’s attention via social media.

It was backstage among the V.I.P.s at Jay Z’s Made in America festival in September that Lil Yachty’s new reality started to sink in. “Obama’s daughters knew who I was,” he said. “They were huge fans. Jay Z said my name to me before I introduced myself.”

And yet, persona aside, a teenager can only be a teenager.

At an Urban Outfitters meet-and-greet in Williamsburg, Brooklyn, among decidedly less dazzling guests, the rapper hid once again behind his hair and phone as overeager young fans offered him anything they could find to autograph: $5 bills, laptops, water bottles, purses, coats and, yes, eventually breasts. Not yet immune to such attention at close range, Lil Yachty could only giggle to himself, shaking his head as he mouthed the words to his own music.