The question the doctor asked that led him to the correct diagnosis was:

Can you hear your heartbeat in your ears?

The patient could. And that suggested the diagnosis:

A dural-arteriovenous fistula, or DAVF

The first reader to suggest this diagnosis was Dr. Adrian Budhram, a neurology resident at Western University in London, Ontario. His is a familiar name in this column. He is a three-time Think Like a Doctor winner whose last win was just last month. If this keeps up, I’m afraid that I’m going to have to institute the rule from the radio quiz show “Whad’ya Know?”: “Listeners who have won recently should sit on their hands and let someone else have a chance for a change.” Still, Dr. Budhram – impressive achievement! Well done!

An arteriovenous fistula is an abnormal connection between the high-pressure arterial system – the thick muscular blood vessels that carry blood forcefully pumped out by the heart to provide oxygen to the rest of the body — and the low-pressure venous system, made up of the thinner, more elastic vessels through which the blood is pushed back into the heart. Normally, blood flows from the heart into arteries and then to tiny capillaries, where the circulation slows and the nutrients and oxygen can move into the tissues. From there, the blood flows into the veins, where it is pushed onward, back to the heart.

AV fistulas occur most commonly in the legs but can occur anywhere in the body — including, very rarely, the brain. Once these abnormal connections form, they cause two immediate problems.

First, the arterial blood is diverted from its normal pathway, and so the downstream tissues can be injured by the loss of expected blood flow. Fortunately, our bodies are well protected against this kind of loss and can quickly grow new vessels, called collaterals, that carry blood around the bypass to the starving tissues beyond.

The second problem is what happens to the more delicate veins when they are hit with the high-pressure blood flow from the heart. Once the abnormal connection forms, the less muscular veins are damaged and, over time, become thickened and scarred and eventually are blocked completely.

As these vessels narrow and close, the body’s ability to create collaterals kicks in and more veins are created to take the blood that can no longer go through, creating, eventually, a sometimes vast network of abnormal vessels to handle the misdirected arterial blood. Sometimes these new veins connect with other venous systems and can cause these veins to thicken and scar up as well, extending the damage even further.

A Problem in the Brain

In this patient, the abnormal connection between artery and vein occurred in the brain. The initial injury occurred in the dura, the tough outer layer of the meninges – the tissue surrounding the brain. That’s why the meninges looked swollen and lumpy in the M.R.I. – they had become crisscrossed with hundreds of scarred abnormal veins, carrying the blood from the misdirected artery.

The symptoms caused by fistulas in the dura are usually headache and pulsatile tinnitus, in which the sound of arterial pulsations become audible to the patient.

This patient had those symptoms, but he had other symptoms as well: How he saw the world changed, as evidenced by his paintings. And his speech and thinking slowed. This wide array of symptoms suggest that it wasn’t just the lining of the brain that was affected, but the brain itself.

One of the dangers of the dural fistula is that it can spread into the vessels of the brain, and that was what happened to this patient. When these abnormal vessels begin to propagate and scar over, then parts of the brain are starved of needed oxygen and nutrients and stop working. Caught early, the damage can be reversed. Without intervention the damage can become permanent.

Treatment is to block the abnormal blood flow between artery and vein. This is done through a delicate series of procedures in which the abnormal veins are filled with coils, glue and plastic. Once these abnormal vessels are closed off, the blood will resume its more normal pathway and, if there is no scarring, function will normalize. Getting to those abnormal vessels is difficult and requires knowledge, agility and experience.

How the Diagnosis Was Made

The 63-year-old painter started getting excruciating headaches not long after starting to paint in oil – a change from the acrylics and watercolors he’d used in the past. Over the course of a few months, these headaches went from being occasional and tolerable to daily and excruciating.

In addition to the headaches, the man began to exhibit changes in behavior that, while subtle, did not escape the notice of his wife of many years. She saw her husband become more quiet and withdrawn. She had difficulty engaging him in conversation – and that was new. And, she noticed, he began to be forgetful. He couldn’t remember where he put his keys, or parked his car.

Odd Changes, Even in Paint

His habits, long established, changed. Always a very organized person, he began to put things in the wrong places – as if he forgot the right place. He was clumsier and stumbled over his own feet. Walking and driving, he drifted to the right. 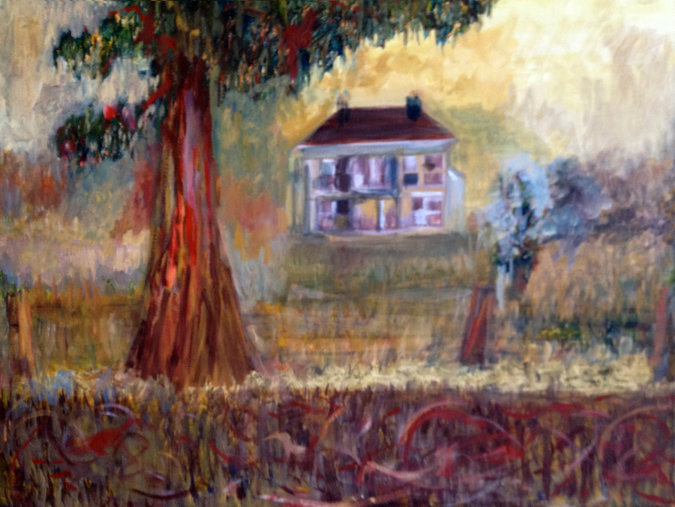 A painting done several months after the patient’s terrible headaches and other odd symptoms had worsened.

Most dramatic of all, the man’s painting began to change – transformed over the course of months from bucolic countrysides to nightmarish landscapes of serpentine roots and decaying trees and houses.

The patient went to his doctor who, after he failed to improve with the usual treatments, had him undergo an M.R.I. of the brain. The results of that scan were clearly abnormal, and so he was referred to a series of neurologists.

Finally, the patient was referred to Dr. Wade Smith, a specialist in strokes and other disorders of brain blood flow. A second M.R.I. suggested that the thick lumpy meninges could be caused by a problem in blood flow.

Dr. Smith asked dozens of questions about the man’s symptoms, his medical problems and his possible exposures.

Finally, Dr. Smith asked what turned out to be the key question: Can you hear your heartbeat in your ears?

The man looked surprised. Well yes, he could. It had started 10 years before, after a devastating high-speed accident in which a drunken driver traveling at over 80 miles per hour had slammed into his car. The impact had sent his car rolling off the freeway and up against a tree.

He was slammed against the steering wheel with such force that his rib cage was broken and his heart was damaged. He’d spent days in an intensive care unit as his heart was monitored and the crazy rhythms caused by the injury were controlled. His wife suffered from multiple broken vertebrae in her back and had to use a wheelchair for a time.

It was after that terrible accident that the patient started hearing his heartbeat, mostly on the right side. At the time, he asked several of his doctors about it and they reassured him that it was usually nothing. So he stopped mentioning it. And no one had ever asked him about it, until now.

A Lesson for Doctors in Training

I can hear it, he told the patient. I hear what you hear, loud and clear.

Then he stepped out and returned with a half dozen residents and students. Can they listen to your skull, he asked the patient? Sure. And each carefully laid their stethoscopes where Dr. Smith indicated. You will probably never see this again in your entire career, he told them.

Based on the imaging and the patient’s symptoms and now this tinnitus, Dr. Smith explained to patient and trainees, he figured that a fistula in the dura that had recently spread to the brain was the most likely diagnosis. It was an extremely rare vascular defect. He’d seen it only once before, when he was in training. His attending at the time recognized it and, thanks to that, he recognized it as well.

One of the world’s experts in treating this kind of vascular abnormality, Dr. Van Halbach, was just a couple of floors away. Dr. Smith picked up the phone and arranged for the patient to be seen by Dr. Halbach later that day.

It took three interventions and nearly 18 hours, but Dr. Halbach was able to locate and block off the abnormal veins and re-establish normal blood flow. Both Dr. Smith and Dr. Halbach agree that this fistula was probably formed at the time of the car accident 10 years earlier, when the pulsatile tinnitus started.

Over the years, the fistula continued to promote the formation of collateral veins, leading to a mass of vessels at the back of the patient’s brain.

You can see what those vessels looked like in the X-ray shown here.

The worsening headaches, personality changes and other symptoms probably arose when the fistula moved beyond the lining of the brain and began to cause these abnormal veins to form in the brain itself.

How the Patient Fared

His wife says that maybe he’s not quite 100 percent back, but he’s darned close. He’s talking again. He’s driving again. And, she’s happy to report, the paintings he’s doing now hark back to the man she married.

You can see one of his recent paintings here.