Set among three generations of a family on the Massachusetts coast as a lethal hurricane approaches, the play is partly a meditation on climate change. The more personal storm that’s bearing down concerns the vulnerable patriarch, a poet named Ashton Sleeper who has lost his words. He is in danger of being shipped off to a nursing home, and his devoted young granddaughter, Piper, is determined to save him.

“Writing plays, you write over your own soul, and you have to disguise it,” said Ms. Howe, the author of the Broadway play “Coastal Disturbances,” which starred Annette Bening and Timothy Daly, and a two-time Pulitzer Prize finalist for “Painting Churches” and “Pride’s Crossing.” 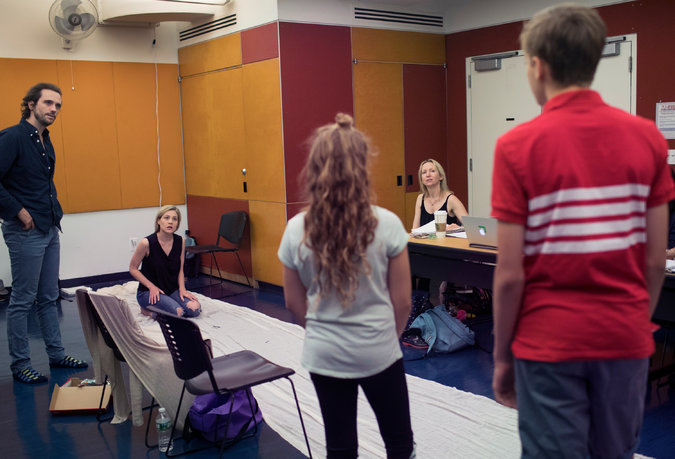 Even so, she freely admits that she is Piper. But she says that it is not her husband but her father — the broadcast journalist Quincy Howe, who died in 1977 — who is Ashton Sleeper, the old man adrift.

On the inauspicious evening in 1959 that Ms. Howe met Mr. Levy, she went to a party in a strapless red satin dress on loan from her mother. “My mother said, ‘Tina, if you want to catch a man, you have to have some bosom interest,’” recalled Ms. Howe, who was as reedy then as now. “I was clutching my small breasts the entire time I was at this party. It was just utter humiliation.”

Such was her predicament when Mr. Levy, a “blindingly handsome” young actor who had had too much to drink, struck up a conversation. “Finally he said” — here Ms. Howe shifted into a comical New York accent — “‘If you can’t wear it, take it off.’ That was how we met. And I ran for the exit.”

It was months before she gave him another chance. When they married in 1961, he promised to go back to Bowdoin College to finish his degree, so Ms. Howe accompanied him first to Maine and then to Wisconsin, where he went to graduate school for history. “Tina was so brave,” he told me that day at their apartment, when evening was falling and Ms. Howe cajoled him into the living room for cocktails and canapés.

They passed a Bloody Mary back and forth, waiting to watch a disappointing sunset, and I mentioned that his wife had told me how they’d met. “Do you remember what you said?” she asked him.

“‘If you can’t wear it, take it off,’” he replied, a little sheepishly. “Terrible.” He paused. “Did I really say that? You must’ve been horrified.”

For five of the eight years since her last full-length play, “Chasing Manet” — which starred her old friend Jane Alexander — Ms. Howe was the inaugural head of the M.F.A. playwriting program at Hunter College. That’s what she was doing in 2013, when Mr. Levy was given a diagnosis of Alzheimer’s disease.

“Because we’re so close, it was very hard for me,” said Ms. Howe, who joined a spousal support group but found it so scary that she stopped going. “I was in denial for so long, which I sort of loved. But then I realized that I was very sad.”

Mr. Levy is in the middle stages of the disease, and it seems to be moving slowly. He remembers the people in his life; he can talk about his grandchildren; he knew that I was a reporter. “Now it’s more just a gradual sort of fading,” Ms. Howe said.

In retrospect, there’s a striking poignancy to the dedication of her collection “Birth and After Birth and Other Plays (A Marriage Cycle)” (2010). “To Norman,” it says. “My beloved husband of almost 50 years whose first words upon waking up in our cozy bedroom on November 8, 2003, were: ‘It got very windy this morning, my dollop, did it blow away our tent?’”

Tents are a motif in “Singing Beach,” whose meshing of worlds — earthbound and fantastical — is difficult to imagine on the page. The script was rejected by every potential producer who read it until Ms. Howe gave it to Ms. Kreith, the artistic director of Theater 167, a small, seven-year-old company founded in Queens and dedicated to multicultural work.

Ms. Howe remains surprised that “Singing Beach” fits with that mission, but Ms. Kreith — whose first crack at directing, as an undergraduate at Yale, was a scene from Ms. Howe’s “The Art of Dining” — said that the new play spoke to her.

“Many people have read it, and it didn’t make sense to them,” she said. “I felt like everything I’ve done led me to a place where it made sense immediately.”

Ms. Howe seems glad to have new collaborators. What she will do next, though, is uncertain. In the course of a four-hour interview touching on things it hurts to talk about, she decided that her roof-deck party play was the wrong thing to write.

That piece’s inspiration, even more than “Singing Beach,” comes from life: a joyous annual party that Ms. Howe and her husband used to attend with old friends from her college days. Since the last party, in 2015, four of the regulars have died. She wanted, she said, to “make them all alive again.” But it might just be too painful.

“Why not write something completely different and celebrate the fact that I’m still standing?” she said, mustering a defiance that was willfully upbeat. “Norman and I are still in our tent together, so how bad could it be?”