In many ways, however, the IM Flash plant is an outlier. While companies based in the United States still dominate chip sales worldwide, only about 13 percent of the world’s chip manufacturing capacity was in this country in 2015, down from 30 percent in 1990, according to government data.

Chip makers attribute the decline to a variety of forces, including high American tax rates and the hefty subsidies offered by foreign governments for new semiconductor plants, which can cost as much as $10 billion.

“It’s quite a bit more expensive to build a factory in the U.S.,” said Stacy J. Smith, the executive at Intel overseeing manufacturing, operations and sales. Intel — which predominantly manufactures in Oregon and Arizona but also has factories in Ireland, Israel and China — estimates that the extra cost for an American plant is more than $2 billion.

Chip makers are hopeful that President Trump, who has promised large corporate tax cuts and a tougher approach to trade with China, will help them.

Intel’s chief executive, Brian M. Krzanich, made a public display of his faith in the administration this month when he stood by Mr. Trump in the Oval Office to announce that the company would spend $7 billion to complete a leading-edge chip factory in Chandler, Ariz., creating 3,000 full-time jobs.

Intel said it was talking with the Trump administration and Congress about a broad corporate tax cut as well as other ways to improve the financial incentives for chip makers to locate new projects here. Although the United States has 76 semiconductor plants, many of them are older, and few new ones are being built. 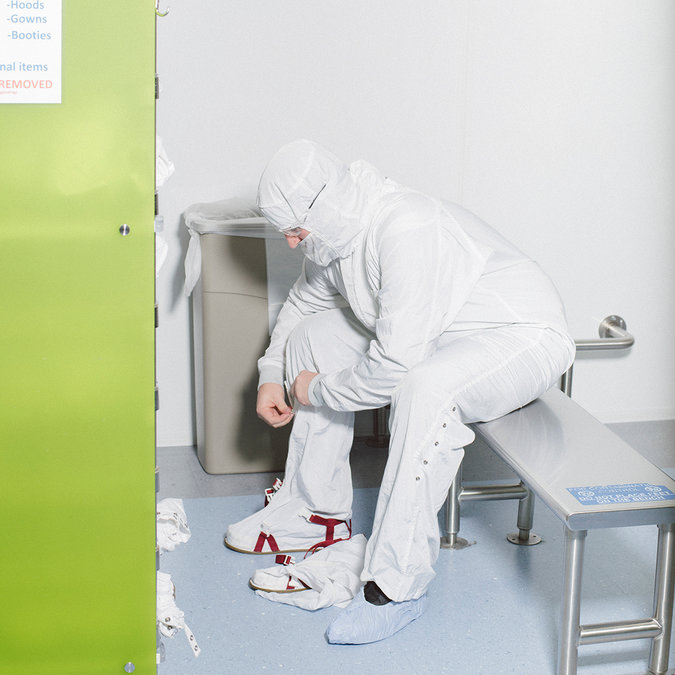 Adam Hendrickson demonstrating degowning at the IM Flash plant, which was built in 1994.

Intel, whose work force relies heavily on highly skilled immigrants, is also pressing the administration to continue allowing such immigrants to enter the country. “We benefit from being able to hire the best talent from around the world,” Mr. Smith said.

The chip industry spends about one-fifth of its revenue on research and development, but it wants more federal funding for basic research into fundamental problems, like how to pack transistors closer together and whether materials other than silicon could form the basis of future chips.

“We would like this administration to double down on investments in basic research in universities,” said John Neuffer, the chief executive of the Semiconductor Industry Association, a trade group that represents American chip makers. “Help us pedal faster.”

Foreign countries have become more appealing for chip manufacturers, in part, because of the rise of contract chip foundries owned by Samsung of South Korea and Taiwan Semiconductor Manufacturing Company. They have made it easy for American tech companies like Qualcomm and Apple to design cutting-edge chips in the United States but outsource production to Asia.

Looming in the background is China, which is currently a bit player in the industry but has committed to spend upward of $100 billion to create a world-class chip industry.

“Today, it’s a modest threat, but two, three, four years out, if China plays out as it plans, it could be very significant to subsectors of our industry,” Mr. Neuffer said.

Unlike many of their competitors, Intel, based in Santa Clara, Calif., and Micron, based in Boise, Idaho, build most of their chips in the United States and conduct virtually all of their research and development in this country.