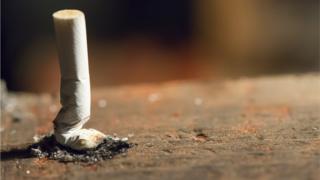 The tobacco industry is hampering efforts to introduce life-saving interventions in low and middle income countries, according to a report by the World Health Organization.

Countries covering two thirds of the world’s population now have measures in place to encourage people to stop smoking.

But tobacco still kills more than 7 million people every year.

Tobacco companies say they are not opposed to “reasonable” regulation.

The proportion of smokers and those using other tobacco products around the world is falling – but it is happening slowly.

One in five people over the age of 15 now use tobacco, compared to one in four in 2007, according to the WHO report on the “global tobacco epidemic”.

Dozens of countries have introduced measures to discourage people from smoking over the the past decade, such as introducing higher taxes for products, advertising bans and smoke free zones.

The Philippines: Introduced a “Sin Tax Reform Law” which increased tax on tobacco significantly over time, earning an extra $5,2bn for other public services, including healthcare.

“There has been progress, but there’s more to do,” said Dr Vinayak Prasad, head of WHO’s tobacco control unit in Geneva.

“Most of tobacco usage is now happening in the Middle East, in Asian economies and (tobacco use ) in Africa is also adding up”

He said that tobacco companies are now increasingly setting their sights on “easier, less regulated markets”, and putting pressure on their governments.

“Many of these countries have not recognised the full value of tobacco taxation to make tobacco more expensive.

“Industry has given arguments on the economic value of tobacco or illicit trade.

“But the health cost burden and economic burden (in total $1.4 trillion) are far in excess than the contribution from the tobacco industry.”

He said the tobacco industry’s key aim is to make profits, and said they shouldn’t be at the table when it comes to national health policies.

“We need to recognise that the tobacco industry is not a friend of the government, they are only there to make profits.”

Some of the world’s biggest tobacco manufacturing companies have told the BBC that whilst they do not oppose reasonable tobacco regulation, they do need to be part of the debate on policy.

Jonathan Duce from Japan Tobacco International, responsible for brands such as Benson and Hedges and Camel cigarettes, said: “We believe that public officials and policing organizations should have access to all facts when it comes to policy-making, including from businesses.

“Topics such as combating organized crime in tobacco should not be addressed in isolation of the available knowledge from various experts which contributes to informing and driving policies that are effective.”