“Tony Bennett Celebrates 90: The Best Is Yet to Come” is built around a September concert at Radio City Music Hall that featured singers such as Stevie Wonder, Michael Bublé, Leslie Odom Jr. and Lady Gaga saluting him. Taped performances came in from Billie Joel, Elton John and Bob Dylan. There are interview segments with Mr. Bennett scattered in, and a show-within-a-show comedy sketch starring Alec Baldwin, who reprises his “Saturday Night Live” impersonation of a blithely clueless and hyper-ebullient Tony Bennett. 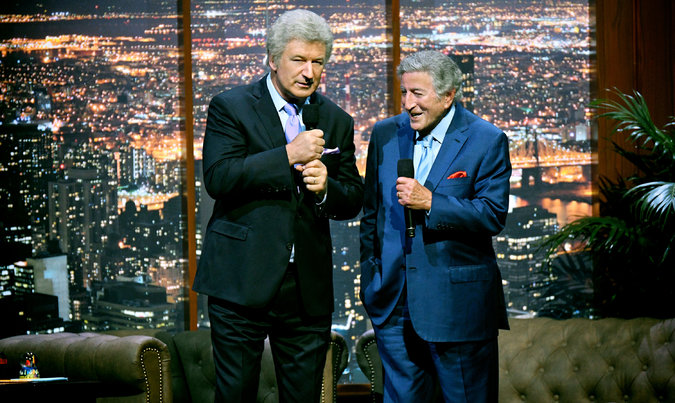 Mr. Baldwin said that the key to capturing Mr. Bennett, beyond the caricature, was portraying “a guy for whom there are no bumps in the road.”

“The thing about this guy,” Mr. Baldwin said, “is that he’s so positive — if I were as talented as him, I’d be positive, too — and so old-school, meaning the lesson you get under everything Tony does is that performing should be fun. ”

Indeed, it seems quite fun to be Tony Bennett. In public, Mr. Bennett’s vocabulary is dominated by three exclamations: Great, Wow and Fantastic, the last of which he proclaims with a strong punch to the second syllable. And those words seem fitting, given his thrill ride of a career.

Beginning with a No. 1 recording of “Because of You” in 1951, Mr. Bennett crooned through a decade of hits with sometimes marginal material, culminating in the international best seller “I Left My Heart in San Francisco” in 1962. Threatened with sinking into casino-act irrelevance over the next two decades, and at one point struggling with drug and alcohol problems, he sharpened his artistic focus, concentrating on American Songbook standards. And aided by his son Danny, who became his manager in 1979, Mr. Bennett climbed back into pop culture consciousness through the ’80s and reached a new demographic-defying pinnacle with a 1994 “MTV Unplugged” recording.

In his ninth decade alone, Mr. Bennett has sold 10 million recordings, including two best-selling albums of duets with myriad other singers. Two years ago, he became the oldest performer to have a No. 1 album, when he paired with Lady Gaga on the standards-only recording “Cheek to Cheek.” He has pulled off the neat trick of constant career rejuvenation while staying exactly the same.

“I could have retired 16 years ago,” Mr. Bennett said one night last month, “but I just love what I’m doing.”

Right then, he had sat down for dinner in the theater district at the traditional early-bird hour of 5 p.m. In his case, the reservation was necessary because he was booked at the nearby City Stages auditorium at 7 p.m., sitting for a public interview about his new book, “Just Getting Started.” There’s also a new album from Sony that collects the performances from his NBC special, with a deluxe three-disc set available that contains a selection of rare recordings from his archive.

“We’re sold out everywhere I’m playing,” Mr. Bennett said. “The audiences are going crazy for the show. They know that I’m 90, and I come out and I’m in top shape. After the third or fourth song, they start flippin’ out. I’m getting five or six standing ovations a night. When they start acting like that, I just go home very pleased.”

During dinner, Mr. Bennett repeated himself occasionally. “I forgot what I was saying,” he admitted more than once, and apologized. Later, being interviewed about his life in front of a large and appreciative crowd at City Stages, he did not remember a primary anecdote that appears in his book about how he had met his current wife, Susan Benedetto — she took her husband’s birth name — a 50-year-old former high school teacher. (She was invited backstage when she was 19 and president of the San Francisco Tony Bennett fan club. They married in 2007.)

But while there are signs of age, Mr. Bennett also displays a voracious curiosity. “I still insist that I can get better as I go along,” he said. He recently started learning the basics of jazz piano with Bill Charlap, his accompanist on the record “The Silver Lining,” a collection of Jerome Kern songs that won him his latest Grammy. His got his first in 1962.

“It’s the same way with painting,” he said. “I paint every day. And just by doing it every day, you get better.”

The recent recording with Mr. Charlap could be a case study to support Mr. Bennett’s contention. Though his voice is less rounded and more reedy than when he was in his 50s, Mr. Bennett’s performances on “The Silver Lining” stand up in comparison to those he made with the jazz pianist Bill Evans four decades ago, securing his status as a serious interpretive artist. “Tony is singing so deeply and interiorly — it’s almost in a private place, yet he has the courage to completely share,” Mr. Charlap said.

Performing the 14 Jerome Kern songs, Mr. Bennett not only displays technical mastery but also an uncanny sense of discretion.

“The more Tony goes on, the more he understands that what you leave out is important,” said Scott Simon, the National Public Radio journalist and co-writer of Mr. Bennett’s latest book. “He has all those stories about Fred Astaire getting a dance routine as good as he could get it, and then taking out 15 minutes. He knows in his bones now what to leave out.”

Even after the blitz of performances and products tied to his extended birthday celebration, Mr. Bennett plans to keep working. He has 30 dates on his schedule for the first half of 2017 and is thinking of recording a new album dedicated to the songs of the husband-and-wife songwriters Alan and Marilyn Bergman. “I might do it with Gaga,” Mr. Bennett said, “or maybe just with Bill Charlap.”

“Tony’s all about moving forward,” his son Danny said. “He tells me, ‘Hey, as long as my voice doesn’t wobble and people like me, I’m going to keep singing until I die.’”

On the morning he awoke in the hotel room on Madison Avenue, Mr. Bennett bundled up for the Macy’s parade on what was predicted to be a raw and blustery day, putting on a heavy gray wool suit and a blue overcoat. He’d shopped with his wife for ear muffs, and she’d stuffed hand warmers into his coat pockets.

Waiting in an S.U.V. to board the float, Mr. Bennett seemed tired and was mostly quiet. What little he talked about was either far in the past — anecdotes about Cary Grant, Dean Martin and Charlie Chaplin — or completely in the moment, as when he lowered the tinted side window to scan Central Park. “The trees are beautiful,” he said.

Then a woman bustled up to his side of the S.U.V. and presented Mr. Bennett a paper plate piled with cannoli. “They’re homemade just for you,” she told him. “You’re even more handsome in person.”

“Wow,” Mr. Bennett said, “let me see that.” He bit into a vanilla cannoli.

“Oh my God,” the woman shouted, “wait till I tell everybody that Tony Bennett ate my cannoli!”

A little later, as the moment approached for him board the float, the sky brightened.

Ms. Benedetto leaned over toward her husband and gestured to the sunshine. “You lead a charmed life, sweetie,” she said.

Mr. Bennett took her hand, closed his eyes and sank back in his seat with a satisfied sigh.