Home Lifestyle Art Trinity Church Is Sued for Moving a Sculpture That Marked the 9/11... 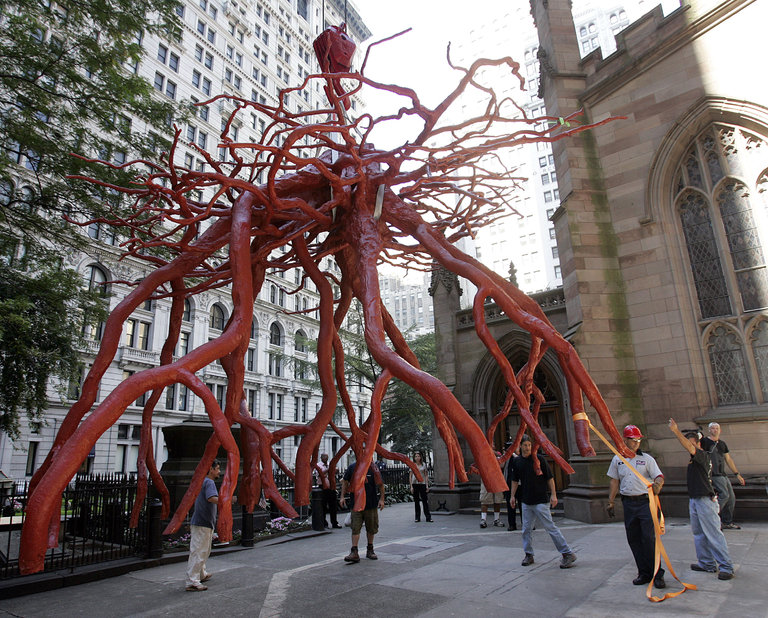 The “Trinity Root” sculpture, being lowered into place in the Trinity Church yard on Sept. 8, 2005. The work was placed at the site of a sycamore that was smashed by debris when the twin towers of the World Trade Center collapsed on Sept. 11, 2001.

A sculptor is suing Trinity Church in Lower Manhattan for moving his bronze re-creation of a huge sycamore tree that once stood in the churchyard.

The sculptor, Steve Tobin, installed the 18-foot-tall work in 2005 in a courtyard at Trinity, whose parish includes St. Paul’s Chapel, where the original sycamore stood until it was smashed by debris when the twin towers of the World Trade Center collapsed on Sept. 11, 2001. Mr. Tobin learned in late 2015 that the church had sent it to a church-owned site in Connecticut without telling him. He said last summer that the church later sent him photographs showing “significant damage — after they had told me it arrived in good condition.”

A lawyer for Mr. Tobin, Steven S. Honigman, said that efforts to come to terms with the church had been unsuccessful. The lawsuit, filed on Wednesday in Federal District Court in Manhattan, accused Trinity of violating a law that gives visual artists rights over works their works, even when they no longer own them. Mr. Honigman said that the law “prohibits the removal of sculptures” created to be installed permanently at a particular site.

The lawsuit said that after Trinity installed the Rev. Dr. William Lupfer as rector in 2015, he moved “to send ‘The Trinity Root’ away because he did not want nonparishioners and ‘hordes of strangers’ to continue to crowd the church’s courtyard.”

The church released a statement that said: “While we have no comment on this litigation, Trinity is pleased to have the sculpture at Trinity’s retreat center, where it will be among a collection of planned sites that will encourage prayerful reflection, remembrance and spiritual transformation.”