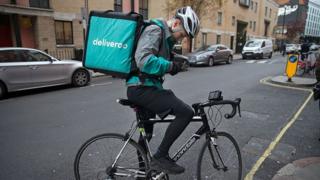 It’s offering new customers a FREE bet when you buy one for Friday’s draw.

TripAdvisor listings will connect to Deliveroo in more than 140 cities in Europe, the Middle East and Asia

Restaurant delivery service Deliveroo is to be incorporated into TripAdvisor listings in cities across 12 countries, thanks to a partnership between the two firms.

Customers will be able to access Deliveroo by clicking “order online” within TripAdvisor.

The scheme will connect more than 20,000 restaurants.

One e-commerce analyst said the move was a “logical step” to encourage customers to use such services.

“Whether reading reviews, reserving a table through TheFork or placing a food order through Deliveroo, our goal is for TripAdvisor to serve as a one-stop-shop for diners around the world,” said Bertrand Jelensperger, senior vice president, TripAdvisor Restaurants.

The strategy was probably designed to improve customers’ relationships with both brands, suggested Martin Gill, an analyst at Forrester.

“Essentially it’s all about connecting service providers to consumers in a more dynamic way,” he told the BBC.

“TripAdvisor has been working on monetising its content for a long time – this is a logical step.”

The news comes on the day of the publication of a British government report on employment practices, which focuses on the “gig economy” – in which people work on a short-term basis, including for companies such as Deliveroo and Uber.

The report recommends that workers for these firms should be classed as dependent contractors, with extra benefits.