Corporate groups hailed the idea of expanding apprenticeship programs and making them more flexible, arguing that apprenticeships are a reliable path to good-paying jobs in sectors like retail and hospitality for those who could no longer support themselves in production sectors like manufacturing.

“We applaud the Department of Labor and the administration for being willing to look at how to craft this in a way that brings apprenticeships to a new range of audiences,” said Rob Gifford, executive vice president of the National Restaurant Association Educational Foundation, which oversees the industry group’s apprenticeship programs.

Mr. Gifford gave credit to the Obama administration for making industries like his eligible for apprenticeship funding. The restaurant industry group won a contract worth up to about $9.75 million under the Obama-era program to create apprenticeships that would run from six months to two years and help candidates for management positions acquire skills in such areas as accounting and sanitation practices.

The administration’s interest in apprenticeships stands in contrast to the cutbacks for other forms of job training in its budget proposal, involving far larger sums. The Association of Community College Trustees said that while it welcomed Thursday’s move, it remained worried about “the severe cuts proposed to federal work force and education programs.”

Underlying the relatively modest size and scope of Mr. Trump’s proposal is a much bigger idea about why workers who have lost good-paying jobs that do not require a college degree are struggling to find work at comparable wages.

In the eyes of the president and many corporate leaders, the crux of the problem is skills — the proposition that employers are eager to fill millions of good-paying jobs that workers lack the skills to perform.

“The U.S. faces a serious skills gap,” Labor Secretary R. Alexander Acosta said during a call with reporters last week, pointing to six million vacant jobs — the most since the department starting keeping track in the early 2000s. The vacancies were especially abundant in manufacturing, information technology and health care, he said.

If the unemployed could acquire the necessary skills through apprenticeships or course work, the thinking goes, companies could quickly fill these jobs, providing workers with economic security and stimulating the economy.

Despite the belief of some, however, there is little evidence that the economy is suffering from an unusually large skills gap.

While economic indicators do show a historically high number of job vacancies, as Mr. Acosta pointed out, research economists tend to believe that the skills gap accounts for, at most, a limited portion of this development. Many experts believe it plays almost no role at all.

But when you do this, according to Aysegul Sahin, an economist at the Federal Reserve Bank of New York, the size of the skills gap today is unremarkable. “The level of mismatch at the occupation level is pretty much where it was before the Great Recession,” she said.

Ms. Sahin points to two other factors causing employers to take longer to fill jobs: the aging of the work force and a long-term decline in the proportion of start-ups in the economy. Older businesses tend to grow more slowly and typically take longer to fill vacancies as a result. They often devote more resources to the process and have more bureaucracy overseeing it, such as a human resources department.

Steven J. Davis, an economist at the University of Chicago, helped create an index showing that the average time it takes to fill a job is the longest since January 2001. He believes that a skills gap could be part of the explanation, but he also sees several other factors. For example, he said, employers have better technology and data to screen candidates for drug problems, criminal records or credit problems, prolonging the hiring process.

Proponents of the skills gap hypothesis typically contend that the loss of many jobs in manufacturing, for example, is offset by the creation of jobs at comparable pay that the same workers could perform with somewhat more training.

“Demand is growing for middle-skill workers — machinists, technicians, health care practitioners and a broad range of other roles,” Jamie Dimon, the chief executive of JPMorgan Chase, said in a Politico op-ed in 2014.

But extensive economic research on the subject suggests essentially the opposite trend: The proportion of middle-skill jobs in the economy has declined since the 1980s, while relative job growth has been concentrated at either the low end of the spectrum, like retail, or the high end, like software development, a related phenomenon economists refer to as job-market “polarization.” The former class of jobs tends to be undesirable for many former factory workers. The latter tends to be out of reach even with additional training. 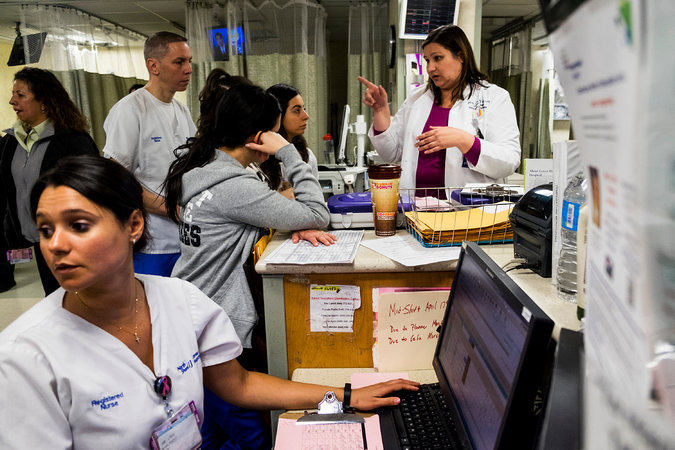 “When the jobs these guys filled go away, it’s not clear there is something new and substitutable any time soon,” said Jason Faberman, an economist at the Federal Reserve Bank of Chicago who has studied the skills gap issue.

Consider health care, one of the sectors both Mr. Acosta, the labor secretary, and Mr. Dimon alluded to as a promising source of middle-skill jobs for retrained workers. Of the six million vacancies Mr. Acosta cited in the overall labor market, one million were in the health care sector as of April, the latest month for which data is available. But the industry hired only about a half-million workers that month — the largest absolute gap of any sector between vacancies and hires.

Some of these jobs are in fact good-paying middle-skill jobs, like diagnostic medical sonographers. The same is true in areas like retail and hospitality, where workers can earn a reasonable living by getting on the management track. Apprenticeships, which have been shown to lead to higher-paying jobs, may well help more workers land these jobs.

But about 70 percent of the health care jobs that the Labor Department predicts will exist in 2024 and classifies among the fastest–growing occupations in the economy paid a median wage of less than $26,000 in 2016 — primarily home health care aides and personal care aides. By contrast, many of the high-paying jobs, like nurse practitioners and nurse midwives, require college or post-college degrees.

So the potential for skills-building to fill many of the economy’s job vacancies is limited.

“I don’t want to say the skill-mismatch problem is irrelevant — it certainly isn’t if you think about a 45-year-old who loses a job in a traditional industry and needs to find a new job,” said Gordon Hanson, an economist at the University of California, San Diego, who has studied job-market polarization. “But we do have abundant evidence that there are just fewer of those middle-skilled jobs available.”