Home Business Up Next: Kelvin Goncalves, Retailer and Designer Behind Elkel 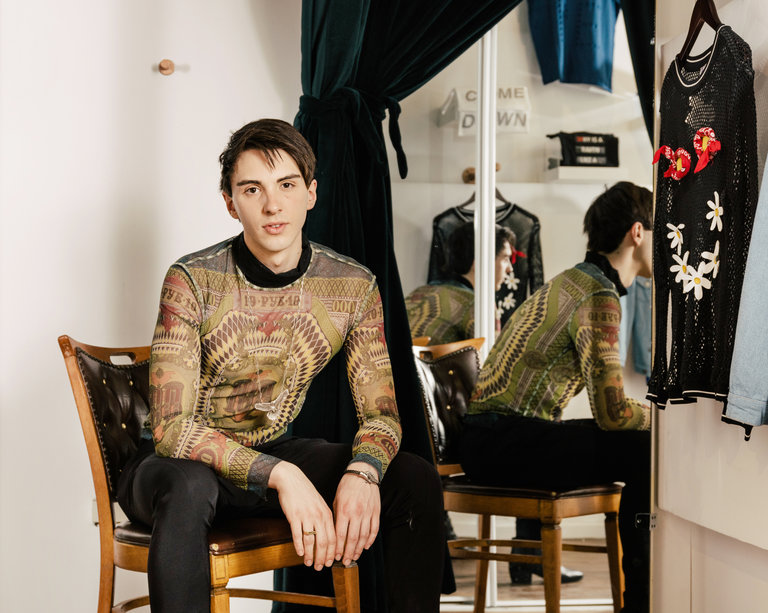 Now Lives In a three-bedroom apartment in Williamsburg, Brooklyn, which he shares with a freelance designer and a yoga instructor.

Claim to Fame Kelvin Goncalves is a fashion retailer and designer behind Elkel, an upstart boutique that features up-and-coming designers with a distinctly queer sensibility. The cutting-edge items have gotten the attention of some celebrities, too, including Bjork and Will.i.am, who bought a high-concept shirt with detachable arms by the gender-blurring brand MLTV ($299).

Big Break An avid internet shopper, Mr. Goncalves would go online to buy avant-garde brands like Julian Zigerli from Zurich and Dusty from Finland, because he couldn’t find them for sale in New York. “I realized: ‘Oh. Here’s a business opportunity. There’s a niche there,’” Mr. Goncalves said. Inspired by his father who opened a bakery in Brazil, he started Elkel in 2015 as an online boutique devoted to new, gender-bending brands. To generate buzz, he opened a tiny pop-up on Stanton Street with a window display created by the transgender artist Bizzy Barefoot. “It can’t be just a store,” he said. “It needs to be an experience and needs to be visually interesting.”

Latest Project In April, Elkel opened a permanent storefront at 48 Hester Street, a minimalist white box to display a colorful mélange of innovative brands like Walter Van Beirendonck and Julian Zigerli. While the store carries mostly men’s wear, some items are decidedly unisex, like a sheer black-mesh basketball jersey by Krizia Robustella ($229).

Next Thing A designer himself, Mr. Goncalves is working on a T-shirt project with the artist Mars Hobrecker. Due in June for gay pride month, the shirt is made from a single panel of triangular fabric, and will feature politically charged images and slogans. “It’s battle time,” he said of making fashion with a message.

Tattoo Inspiration Designers like Vivienne Westwood and Jean-Paul Gaultier are his heroes, but Mr. Goncalves’s artistic muse is Keith Haring. He has a Haring-inspired tattoo on his right bicep, featuring one of the artist’s trademark cartoonlike figures. Much like Mr. Haring, Mr. Goncalves uses happy things to address serious subjects. “People are more likely to listen when you show up with a smile rather than start ranting right away,” he said.

An earlier version of this article misstated where Kevin Goncalves’s father opened a bakery. It was Brazil, not New Jersey.