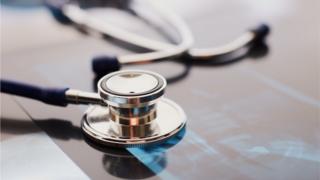 Aneurin Bevan University Health Board had the highest and second highest-paid locum – at £159,000, BBC Wales learned via a Freedom of Information request.

NHS Wales Employers said there was “always a requirement” for locums agency staff to provide cover and flexibility in the health service.

The request for information asked all health boards to list their five highest-paid locums and their total spend on non-permanent doctors and agency workers in each of the last three years.

Hywel Dda University Health Board refused to disclose how much its highest-earning locum received.

Abertawe Bro Morgannwg University Health Board, Cwm Taf and Cardiff and the Vale said they did not hold the information.

The percentage of each health boards’ labour spend that went on non-permanent staff last year ranged from 3.69% (Powys Teaching Health Board) to 6.31% (Betsi Cadwaladr).

“The attractiveness of a career as a locum could be seen as a response to the unattractiveness of a permanent position in the NHS currently, where doctors are dealing with excessive workloads and a lack of flexibility over their working patterns,” he said.

Dr Banfield said Wales must not move away from using temporary staff to cover for staff illness and peaks in demand, to an “over-reliance on locums covering posts”.

“We urgently need improved workforce planning by health boards to ensure that clinical care is not affected by doctor shortages that could be foreseen and therefore allowed for,” he added.

She said a recent BMA survey showed that 82.1% of GPs were worried about the sustainability of their surgeries.

“We want to work with the Welsh Government to begin addressing these issues so that patients have equitable access to high-quality services across Wales.”

The spending on agency staff is a symptom of the problems the NHS is facing in hiring, training and retaining its workforce.

Only last week, the Royal College of Physicians warned of a “looming crisis” over recruitment and workload.

The Health Foundation think tank recently highlighted how this could also have a negative impact on the NHS in trying to keep its finances in order.

The Welsh Government has a campaign to make Wales an attractive place to live and work for both GPs and hospital staff.

Not solving the recruitment issue leaves health boards in a Catch 22 position.

If they restrict or control services on the grounds of cost they will be criticised by patients who value these services close to their homes.

But if they spend on locums to fill the gaps in rotas they will equally be criticised by those who might ask if it is public money being well spent.

But Richard Tompkins, director of NHS Wales Employers, said there is “always a requirement” for locums to work in the health service.

“They are used to cover longer-term gaps, when staff may be off for maternity leave or long-term sickness, or to make sure that we can maintain safe services when cover is needed at short notice.

“Maintaining the quality of patient care is our priority and agency and locum staff can provide an essential means of increasing staffing levels to help manage short-term peaks in demand.”

A spokesman for Aneurin Bevan University Health Board: “We have an active recruitment programme in place to fill vacancies in the health board.

“We also have a number of medical training initiative schemes with the Academy of Royal Medical Colleges, which are designed to allow a small number of doctors to enter the UK from overseas for a maximum of 24 months before they return to their home countries.

“The figures provided in response to the Freedom of Information request included doctors on fixed term contracts used to replace substantive posts, or to cover a pressing senior vacancy for periods of up to one year. As often as possible these individuals are actively recruited into permanent contracts.

“Wales-wide factors such as unfilled training posts in some specialties are currently resulting in an increased demand for short term ad hoc locum cover, which is action we need to take in order to continue providing safe services of the highest quality.”

The Welsh Government said it recognised there were “real challenges” around the recruitment and retention of some medical staff, but this was not “unique to Wales”.

A spokeswoman added: “We know the use of agency and locum staff has increased across Wales, however they continue to represent a small proportion of our frontline health staff.”