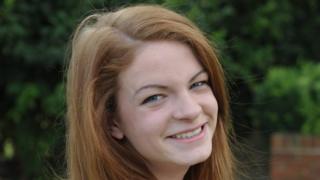 Fiona Hollings is being treated in Glasgow, nearly 400 miles from her home in Buckinghamshire

“It adds to the pain, the distance. It makes it far worse and it doesn’t need to be like that.”

Over the past four months, Stephen Hollings and his wife Julia have travelled more than 8,000 miles to see their seriously ill daughter.

She is currently being treated in a specialist eating disorder unit in Glasgow – nearly 400 miles away from her family home in High Wycombe in Buckinghamshire.

“Phone calls can be very difficult because you can’t see body language, you can’t give them a hug – all the things that you’d love to do,” said Stephen.

BBC Radio 5 live Investigates has followed the progress of Fiona Hollings since the family contacted the programme for help in July.

At that time, Fiona was being treated in a general mental health ward in Oxford, where the family say her health continued to deteriorate.

It took over a month to find a suitable bed, but the only one available was in Scotland.

Stephen said: “That distance, it hurts. What is already a sad, tough and emotionally challenging episode, it just makes it that much harder.

“It’s utterly unacceptable and the government needs to wake up to the fact that more resource is required to fund the hospital beds to look after these young, vulnerable people in a proper caring way.”

Oxford Health NHS Foundation Trust told that programme that it was unusual for a patient to have to travel so far away.

“We are working hard to address the issues around demand for specialised eating disorder care beds.”

More than 1.6 million people in the UK are estimated to be directly affected by eating disorders.

Latest figures from NHS Digital show that hospital admissions for eating disorders in England are increasing.

Meanwhile, data from the Office for National Statistics (ONS) shows that the number of deaths in England and Wales where an eating disorder was the underlying cause have also risen.

Doctors have told the BBC that demand for treatment of illnesses like anorexia and bulimia is outstripping supply.

“In our service we are full most of the time. What that sometimes means is that we may have to prioritise one patient over another and delay one patient’s admission.

“Coming into hospital is a period of high anxiety and then to find out it might be delayed can really increase that anxiety.”

NHS England is responsible for commissioning eating disorder services in the country; 5 live Investigates asked how many specialist eating disorder beds were currently available for both adults and children.

It provided only the number of beds for children and adolescents, of which there 186 in England.

NHS England told the programme that bed capacity was a finite resource and sometimes due to pressure in the system patients could be placed farther away than it would like, but every effort was taken to bring the patient back closer to home.

But Dr Mountford said adult services also needed further investment. “People we see in our services still need a lot of input and support if we are to enable them to recover.”

Northern Ireland has no specialist eating disorders unit and patients are treated in the community but this is currently under review.

Wales also has no single condition eating disorder units but since 2012 annual funding of £1m has been available to develop specialist community eating disorder teams for adults.

An extra £1m of funding was also announced in October to help improve the treatment of eating disorders.

Meanwhile, the Scottish government said the majority of people were treated in the community but in-patients are treated in specialist eating disorder units or mental health hospitals.

The Department of Health said it was unacceptable for people to be sent hundreds of miles away for care and it was looking to eliminate inappropriate out-of-area placements by 2020-21.

A spokesperson said: “We are investing £150m on making sure community services are available for young people in every area of the country as we recognise the majority of problems begin before 16.

“There are also plans to develop standards that will improve care for adults with eating disorders.”

5 live Investigates is on BBC Radio 5 live on Sunday, 27 November at 11:00 GMT. Listen online or download the programme podcast.