Home Lifestyle Art What’s on TV Tuesday: ‘Fresh Off the Boat’ and Louis C.K. on... 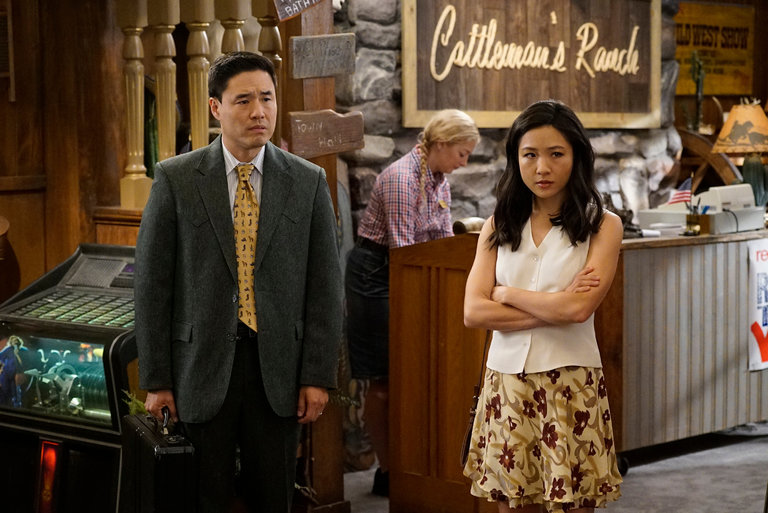 Randall Park and Constance Wu in “Fresh Off the Boat.”

“Fresh Off the Boat” takes on illegal immigration in a story centered on the 1996 presidential election. The Science Channel investigates how playing video games affects your brain. And Louis C.K. takes the stage of the Apollo Theater on “Conan.”

FRESH OFF THE BOAT 9 p.m. on ABC. As the Cattleman’s Ranch prepares to become a polling station for the 1996 election race between Bill Clinton and Bob Dole, Jessica reports an employee she suspects of being undocumented to the immigration authorities — only to discover that her own status is questionable.

30 FOR 30: HIT IT HARD 8 p.m. on ESPN. The life and times of the golfer John Daly, from his 1991 P.G.A. Championship at Crooked Stick in Carmel, Ind., to his redemption at the 1995 British Open in St. Andrews, Scotland, with alcohol, gambling, women and depression in between.

THIS IS US 9 p.m. on NBC. In the present, Kate interviews for her dream job — but there’s a catch. Randall doubts his career choices. And Kevin’s relationship with Olivia takes a sharp turn. In the past, Rebecca and Jack can’t agree on how to treat their gifted child.

LAST SQUAD STANDING 9 p.m. on Oxygen. Three groups of female besties live together, compete in challenges and grow brutal for $100,000.

YOUR BRAIN ON VIDEO GAMES 9 p.m. on Science. Do violent video games increase aggressive behavior in young people? Scientists debate the topic, along with video game addiction and the use of games as training tools.

SAINT LAURENT (2015) 10 p.m. on Starz Cinema. Bertrand Bonello conjures the couture workshops of Yves Saint Laurent (Gaspard Ulliel) during his heyday in the mid-1970s — then follows him and his hangers-on through a realm of hard drugs and kinky sex, from the atelier into Paris nightclubs, Morocco and finally to bed. “It’s a giddy, intoxicating, decidedly decadent feeling, but ‘Saint Laurent’ is more than merely seductive,” A. O. Scott wrote in The New York Times.

ZOOTOPIA (2016) on Netflix. Judy Hopps (Ginnifer Goodwin) wants to become the first rabbit police officer in Zootopia. But her parents aren’t exactly pushing her to bounce through the glass ceiling. “If you don’t try anything new, you’ll never fail,” her father advises her. After graduating from the academy, her boss (Idris Elba) banishes her to parking-ticket duty, while more experienced officers investigate a slew of missing-mammal cases. That’s when she meets the foxy hustler Nick Wilde (Jason Bateman), who will become her partner in crime-solving. Neil Genzlinger of The Times called this animated feature “irresistible.”