So far the drive to create digital maps has been slow. Google’s former self-driving car division — now a company called Waymo — has created maps for roads around its headquarters in Mountain View, Calif., and a handful of other cities, including Austin, Tex., and Kirkland, Wash. 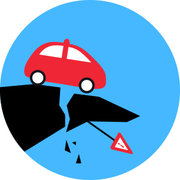 5 Things That Give Self-Driving Cars Headaches


Waymo creates the maps by driving around cars equipped with spinning lidar units mounted on their roofs that shoot out laser beams, creating images of the road and the surroundings. Human engineers, in a time-consuming process, then go over the images and tag the objects that are found, like stop signs, buildings, stoplights and do-not-enter signs. The laser equipment needed to do this scanning is expensive — it can cost $100,000 or more to outfit just one car to do this job.

Another company, Here, which was started by Nokia and then acquired by the German automakers BMW, Daimler and Audi, is also mapping roads in the United States and Europe. It is drawing on data scooped up by scanning systems that trucking companies have agreed to install on their vehicles. Here also has its own fleet of cars collecting images, and is working on algorithms to enable computers to annotate the maps.

The effort may soon shift into higher gear, thanks to an idea borrowed from the internet that has helped in other fields: crowdsourcing.

Mobileye supplies front-facing camera systems that enable cars to detect obstacles and brake to prevent or mitigate collisions. Starting with 2018 models, both Volkswagen and BMW will outfit their vehicles with Mobileye systems that can also transmit their precise locations and images of the roads they are traveling, which can be synthesized into one giant digital map.

Mr. Shashua said his company expected to sign on many other automakers to do the same. “You can leverage the fact that you will have millions of cars with cameras — almost all the new cars that hit the road,” he said. “This is a force multiplier.”

Others are thinking along the same lines. A technology start-up called Civil Maps is trying to develop its own image-vacuuming device and hopes to persuade automakers to install it in cars and trucks. The company is also working on artificial intelligence technology that it hopes will automate the annotating of maps — the other big technological challenge. Its work has attracted an investment from Ford Motor.

“For full autonomy, we believe we need to have a high-definition map of the area we’ve been operating in, a map annotated with what are the permanent fixed objects in that area,” said Raj Nair, the global product development chief at Ford, which has vowed to begin producing a fully autonomous car — with no steering wheel and no pedals — by 2021. 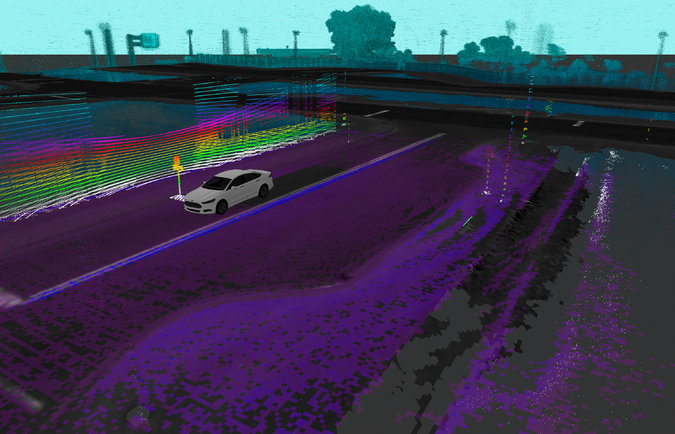 In an image from the Ford digital map of Mcity, colors denote objects like road signs and a fence that were detected by a laser-based sensing system.

The reason digital maps are so important is that even the most advanced sensors, like radar and cameras, are not enough to enable a car to navigate a chaotic and changing world safely enough to allow occupants to lean back and take a snooze.

Digital maps ease the burden by helping give foresight to a car’s computers, and adding redundancy to the car’s understanding of the situation it faces, said Civil Maps’ chief executive, Sravan Puttagunta. Radar and cameras cannot always recognize a stop sign if pedestrians are standing in the way or the sign has been knocked down, he explained.

“But if the map knows there is a stop sign ahead, then the sensors just need to confirm it,” Mr. Puttagunta said. “Then the load on the sensors and processor is much lower.”

The need for data that can complement radar and camera readings was made clear last year when an Ohio man, Joshua Brown, died in a crash in Florida when his 2015 Tesla Model S was operating under control of the electric car’s Autopilot system.

As the car was traveling on a state highway at 74 miles per hour, a white tractor-trailer was crossing the road, but Autopilot’s sensors had trouble recognizing it against a bright sky. Tesla has said Autopilot may have thought the truck was an overpass.

A digital map could have shown that there was no overpass in that location and that an obstacle was blocking the road. As it was, neither the car nor Mr. Brown hit the brakes.

An investigation of the crash by the National Highway Traffic Safety Administration found no safety defect in Tesla’s Autopilot technology. It added, however, that Tesla needed to be cautious in its marketing and advertising not to overstate the capabilities of Autopilot, a semiautonomous system that requires drivers to keep their eyes on the road and hands on the steering wheel.

Last fall, Tesla updated Autopilot, and one upgrade is a basic use of digital mapping. Cars that have the new software, known as Version 8, note the positions of road signs, bridges and other objects, and send the data to a Tesla database that other Tesla vehicles can draw on to make safe driving decisions. Tesla calls this “fleet learning.”