Home Lifestyle Art When They Met: Danny DeVito and Christopher Lloyd, Back to the ’70s

Danny DeVito The time I met Chris, I’d never gone to an audition like that.

Christopher Lloyd It was unusual, even for the ’70s.

DeVito You go up this endless, steep staircase at Harlequin Studios to a rehearsal room, and there’s the movie’s director, Milos Forman. He had arranged seats in a semicircle, and he’s playing the Big Nurse himself, Nurse Ratched, leading us in a group therapy session.

Lloyd Usually you read lines with another actor. This was all improv, with Milos playing the scary nurse.

DeVito He’d ask you, have you got a family? A sister? Tell me about your sister.

Lloyd The point was to be in a conversation that felt unsure, risky, and then, what do you say?

DeVito Chris knew how to listen, to pause. He was committed and didn’t try too hard. 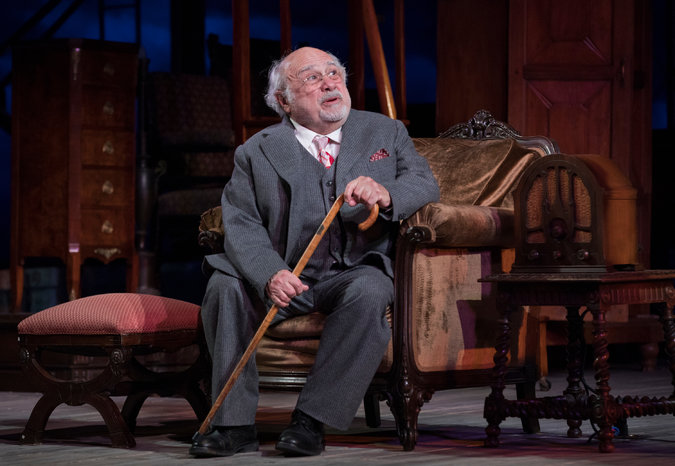 Mr. DeVito was nominated this week for a Tony Award for best featured actor as an antiques dealer in “The Price,” his Broadway debut.

Lloyd Once the movie was cast, we all headed to Oregon to shoot at an actual hospital with mentally deficient people.

DeVito Milos actually wanted us to live and sleep in the hospital, but we couldn’t because right above where we were shooting was a real mad house. Like, guys who were murderers.

Lloyd We rehearsed by doing real group therapy sessions with some real patients. I remember somebody on the staff commenting that it was hard to tell the fact from the fiction.

DeVito Milos’s big direction was always, “That is not natural,” for anything he didn’t like.

Lloyd I learned from that. There were a couple times with close-ups where I tended to overact. I would use more of my face than I needed to. I learned how to be more subtle.

DeVito Chris and I got together again with Jack Nicholson a few years later, when he directed “Goin’ South.”

Lloyd I was in a Broadway musical, “Happy End,” with Meryl Streep, and Jack came backstage to talk to her about being in “Goin’ South.” And he saw me and just said, “I’m going to send you the script.” And that was it.

DeVito Jack called me and said, “Come meet me over at Paramount.” And I came over, and that was it. Nobody auditioned for that movie.

Lloyd That was a good thing for me, because other than “Cuckoo’s Nest,” I never got a second look on any film I auditioned for. It didn’t click. I could feel it in the audition room. Not happening.

DeVito Why do you think?

Lloyd I guess I’m not good at being a “type.” And I had an attitude about some work, like television sitcoms. It was selling your soul.

DeVito I went out for TV shows — “Police Woman,” “Starsky & Hutch.” One day I got this script for this thing called “Taxi.” I was all for it. Go audition, why not?

Lloyd I had told my agents that I didn’t want to do television. I can’t believe I had that gall, looking back on it. I would never condescend to do TV, and then “Taxi” called up for a guest spot in the first season. And my common sense kind of took over, I guess.

DeVito Everyone was excited to get Chris on.

Lloyd There’s been so much speculation about whether you were the person who got me “Taxi.”

DeVito Honest to god, I don’t remember having the brainstorm to do that. I may have been positive about having you play Reverend Jim when I heard the “Taxi” guys were thinking about it. I think they just saw us work together in those movies, and they knew — they were pretty smart guys.

Lloyd I only had the script for a weekend and went into audition for a bunch of guys. I put together a costume, and the guys said, wear that to the show. That was my costume.

DeVito It was a great introduction for Reverend Jim. He was presiding over the wedding of Latka (Andy Kaufman) and a hooker so he could get a green card. She’s gorgeous, her boobs are out to here, and Latka has written a speech that goes, “You will always be a tart to me.” He meant “part of me.” It was so hysterical.

Lloyd In New York theater, you always talk about wanting a great ensemble of actors. That first episode, I thought, this is the ensemble people talk about.

DeVito It changed everything for me, acting in that show and getting to direct a couple “Taxis.”

Lloyd It was a whole new ballgame.

DeVito After that, I moved into directing, producing, starring. James L. Brooks [a creator of “Taxi”] was very influential. I worked on “Terms of Endearment” with him, and one thing led to another. Now Broadway.

Lloyd “Cuckoo’s Nest” started changing things for us, and “Taxi” put us on the map, as far as playing character roles for a career. Which was fine by me.

DeVito Me, too. We’d like to work together again, two good characters. Chris and I see each other more now that we’re both in New York more. A lot of the “Taxi” actors are in New York now.

DeVito Maybe we’ll threaten the Broadway stage with something together.