“I can’t believe it’s a hair bow that’s doing this,” said Jennifer Roth Saad, the creative director of H.E.R. “I’ve never seen something like this.”

JoJo said in a phone interview that she had worn a side ponytail with a bow since she was 4, and she has worn it through most of her career, which includes stints on “Abby’s Ultimate Dance Competition” and “Dance Moms.” But recently, she has become well known to her 2.7 million YouTube subscribers for wearing a bow and being goofy by showing videos of her sick in bed, getting ready in the morning and playing pranks on another YouTube star.

“I’m 13, and I like being 13,” said JoJo, who divides her time between Omaha and Los Angeles. “A lot of people my age try to act 16. But just be your age. There’s always time to grow older. You can never grow younger.”

In Britain, where JoJo’s bows are even more successful than they are in the United States, the head teacher of a school in Bury banned the bows because they were distracting, while another school, in Long Eaton, permitted the bows so long as they conformed to dress code colors. 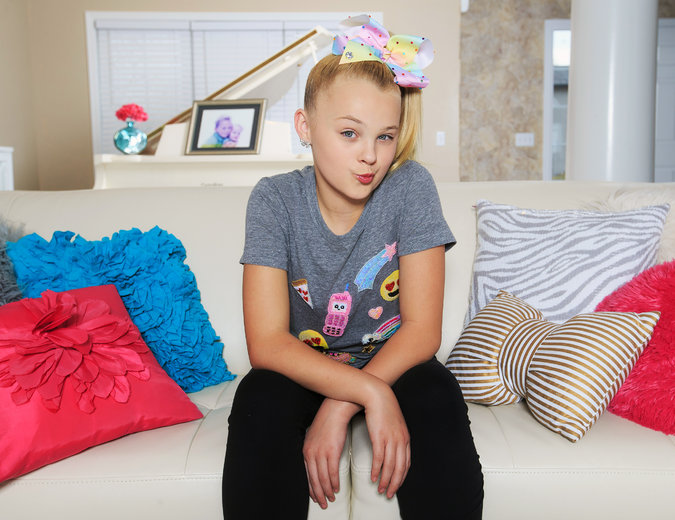 The 13-year-old is part of a growing group of girls who are documenting routine behaviors and activities online for audiences nearing and in their early teenage years.

Shauna Pomerantz, a sociology professor at Brock University in Ontario and an author of “Smart Girls: Success, School and the Myth of Post-Feminism,” said school administrators had historically policed girls for wearing skirts that were too short or having exposed bra straps, not for an accessory reminiscent of the 1950s. “JoJo stands for being nice,” she said. “And the bow is a representation of JoJo. Ultimately the goal of that video is to suggest that meanness isn’t cool, and niceness is cool.”

In a world where parents of children ages 8 to 14 have long been concerned about hypersexualized clothing, early puberty and overly sophisticated media messages, JoJo is part of a growing group of girls documenting routine, age-appropriate behaviors and activities such as being nice, doing their chores, divulging what’s in their backpacks, making dresses out of garbage bags and working to pay for their own clothes.

The 12-year-old competitive gymnast Annie LeBlanc, a.k.a. Acroanna, has had a YouTube channel since she was 3. On her channel, which as been viewed a combined 174 million times, Annie documents herself making slime blindfolded and investigates what’s in her purse. But mostly she appears on her family’s channel, Bratayley, where 3.9 million subscribers follow her, her parents, her 8-year-old sister, Hayley (who also has her own channel), as well as archival footage of her brother Caleb, who died two years ago at age 13 of a heart condition. There are Bratayley sponsorship deals, Bratayley merchandise and a more recent invitation for Annie to participate in Nike’s Young Athletes program, which, naturally, was documented on Bratayley.

Many popular videos made by girls in the pre- and early teenage years live on nine connected YouTube channels. Seven Super Girls, the most successful of these channels, has over six million subscribers and its videos have been viewed a combined 6.9 billion times. Each channel — others are called Seven Cool Tweens, Seven Awesome Kids and Seven Twinkling Tweens — is run with more efficiency than some professional media sites: Each girl is responsible for making a video on a specific day of the week. (Annie was on Seven Awesome Kids from 2010 to 2011.) They follow a set of guidelines that include weekly themes, and precludes them from giving their surnames and location.

The SAKs channels, as they are known, were started in 2008 by seven families in Britain who, in the early days of YouTube, wanted to make sure their children were making family-appropriate content. The only remaining parent of that original partnership is Ian Rylett, who is currently in charge of the SAKs operation.

Mr. Rylett, who lives in Leeds, said producing the channels was essentially his full-time job. He and a team of six others take care of copyright issues, create sponsorship deals, come up with weekly themes, monitor the channels and arrange meet and greets. The tickets for a 1,000-seat event that is coming up in Orlando, Fla., are selling for $30 each.

Mr. Rylett receives an income from the channels, as do some of the girls. The girls own their own content, he said, but they have not signed contracts.

Alexis, a 12-year-old from Southern California whose parents wanted her surname withheld for privacy reasons, has made close to 200 videos for Seven Cool Tweens and Seven Awesome Kids over the past three years. Alexis wears her reddish-brown hair in a braid, no makeup and braces. Her bedroom isn’t catalog perfect. Her most popular videos revolve around silly antics like pranking family members (which received 23.2 million views), making a mess of herself and her outfit before the school dance and getting grounded for life. The appeal? “Kids want to watch kids,” Alexis said in a phone interview.

Emily (a screen name), 12, of Seven Awesome Kids is home-schooled in Southern California. Some of her most popular videos — she writes and edits them herself over two days — include walking through a mysterious forest and finding an angel potion. “She’s a little Stanley Kubrick, controlling everything,” said her father, Tim Gould.

While Alexis has received money from the SAKs channel (though she has not been involved in sponsorship deals), Emily has not received money, their parents said.

“They’re free to leave whenever they want,” Mr. Rylett said. “They can take their content with them. When they do get older, it is quite common for them to look back and say, ‘Eww.’”

The parents seemed ambivalent about the arrangement — knowing that allowing their children to have an online identity comes with risks of harassment or worse — but they don’t want to stop their daughters from dreaming of becoming a director or an editor or a writer. Or a television star.

Yet this YouTube activity, even depicting wholesome activities, is disconcerting for Emily Long, the director of communications and development at the Lamp, a media-based literary group. “It’s troublesome to me when I see this being celebrated as the herald of what our young girls should aspire to,” Ms. Long said. “That you, too, can go from being a YouTube star to having your own deal on Nickelodeon.”

She would like to see girls being recognized for more thoughtful content, she said, such as that of Marley Dias, 12, who started the #1000BlackGirlBooks campaign last year after recognizing a scarcity of black-girl protagonists.

“If I had a 13-year-old,” Ms. Long said, “I would push her toward someone like Marley Dias instead of JoJo. But Marley Dias doesn’t sell giant hair bows. Marley Dias sells social justice and social causes and writing and nerd culture. And there’s plenty to market there.”