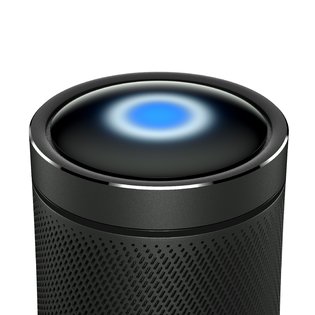 Harman International announced on Monday the release of the Invoke, a speaker powered by Microsoft’s Cortana intelligent assistant.

Amazon said it plans to release the Echo Show in late June, with a starting price of about $230 for a single device, or two for $360.

The Echo was an oddity when Amazon released it in late 2014, a time when smartphones and touch-screen devices seemed to be elbowing other devices out of the way. But since then, the products have remained top sellers on Amazon’s site, though the company would not say how many it has sold.

Rivals have scrambled to come up with their own smart home devices that have voice controls at their core. Google released its Home device last year. On Monday, Harman International, the audio gear maker owned by Samsung, announced the release of its own smart speaker, Invoke, powered by Microsoft’s Cortana intelligent assistant.

Still, many have struggled to catch up to Amazon. The company is projected to have 70 percent of the voice-enabled speaker market in the United States this year, according to an eMarketer study published on Monday. Google Home is estimated to have about 24 percent of the market, with the rest split between smaller players.

According to eMarketer, more than 35 million Americans will use a voice-activated assistant device at least once a month this year, more than double the number from last year.

All of this is a turnabout for Amazon from a few years ago. At the time, the company was floundering in the market for devices, battered by the failure of a smartphone that never made a dent against Apple’s iPhone and Samsung’s family of devices. Amazon’s breakthrough came when it figured out a way to package technologies like voice recognition and artificial intelligence in a device for the home that could be commanded without having to look at a screen.

Dave Limp, Amazon’s senior vice president for devices, said its Echo products were part of a category of “ambient computing” — devices that can be controlled in a communal setting, like inside a home or a car, primarily with voice.

“You shouldn’t be compelled to go and interact with the screen — you should be able to do it with your voice,” Mr. Limp said in a product briefing. “It’s very different from traditional computing as we’ve known it for the last three decades.”

Yet there are obvious limitations to devices that rely entirely on voice interfaces, which the Echo Show is intended to address.

The screen on the device adds the ability to stream videos, show lyrics while playing music, and display calendar events and voice-dictated text messages to other Echo users. Displaying movie showtimes and other lists on a screen, as the Echo Show can, is more convenient for users than Alexa reading them.

The catch is that for now, the only people an Echo user can call are other Echo owners, or anyone with an Alexa app on an iPhone or Android device. Mr. Limp said there was no technical limitation that would prevent Amazon from connecting a phone number to an Echo device that would allow them to be reached by people with telephones. But he declined to say whether Amazon intended to offer that capability.

Because the Echo can be used only as a speakerphone, it also is not likely to be used for private calls when others are present in a room. Ms. Milanesi said she was skeptical about whether Echo could supplant smartphones for voice calling.

“We’re so used to using our phones,” she said. “Finding a reason to use Alexa for that is harder. They need to give you something more specific and interesting and different than other platforms we’re engaged with.”