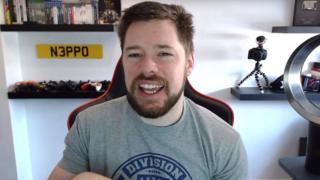 Two men who ran a betting website connected to the Fifa video game have pleaded guilty to offences under the UK’s Gambling Act.

The two men had previously pleaded not guilty. They are still to be sentenced.

It is the first time the UK’s gambling commission has prosecuted people for running an unlicensed gambling website connected to a video game.

The men ran a website called FUT Galaxy that let players transfer virtual currency out of the Fifa 17 video game, and use it to bet on real-life football games.

Winnings could then be transferred back in to the Fifa 17 video game.

But crucially, the Fifa virtual currency can also be sold on an online black market, giving the virtual coins real world value, like casino chips.

Similar betting websites connected to other video games also exist, and news site Bloomberg has suggested the market is worth billions of pounds.

Douglas, 32, from Ferndown, Dorset, admitted a charge of being an officer of a firm that provided facilities for gambling without an operating licence, and a further offence relating to the advertising of unlawful gambling.

Rigby, 33, from Colchester, Essex, pleaded guilty to two charges connected to the provision of facilities for gambling, and a third offence linked to advertising illegal gambling.